Skip to content
Japan Okinawa
This post may contain affiliate links. Please read my disclosure policy for details. As an Amazon Associate, I earn from qualifying purchases.

With its collection of the whale sharks, rays, and fish from the surrounding ocean, Churaumi Aquarium located in Ocean Expo Park is a must-see when visiting Okinawa!

Churaumi Aquarium is one of the most popular attractions in Okinawa. Since opening in 2002, it has welcomed millions of visitors to its many exhibits about the ocean life surrounding Okinawa. 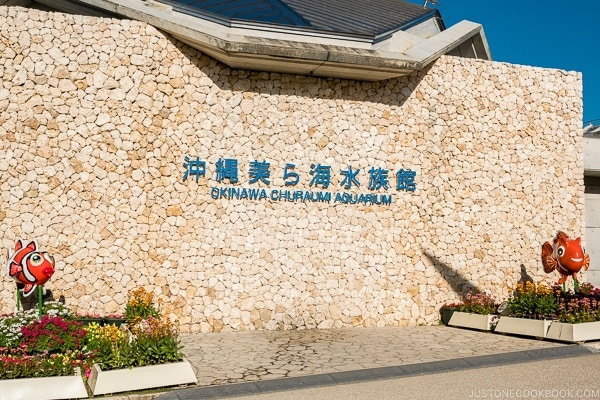 Churaumi Aquarium was one of the highlights during our visit to Okinawa. There’s something magical about seeing the giant whale sharks in person swimming in the tank.

Churaumi Aquarium used to be the world’s largest when it first opened but has now been surpassed by aquariums in Atlanta, Singapore, and China. The name Churaumi means “clear beautiful ocean” in the Okinawan language. 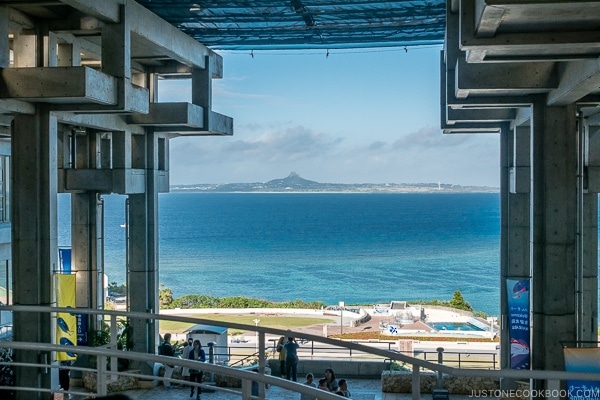 The aquarium building consists of 4 levels and it’s fairly easy to self-guide as the path only goes one way from the entrance. Visitors enter the aquarium on the 4th floor and make their way down to the first floor while viewing the exhibits.

To start off, once you go through the entrance, there’s a touch pool where visitors are allowed to touch various starfish and sea animals. 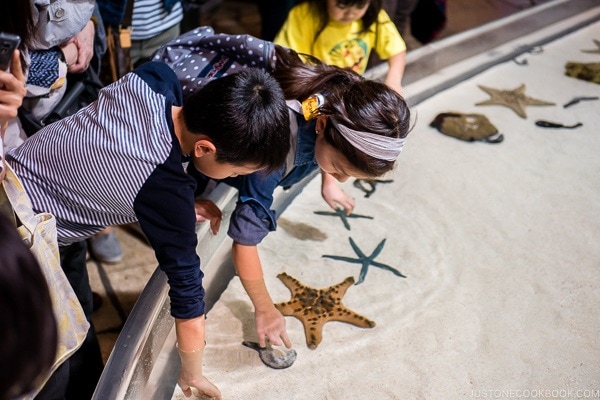 After the touch pool, the next exhibit is The Coral Sea and the Sea of Tropical Fish where 70 kinds of real corals are grown in the tank along with the tropical fish. 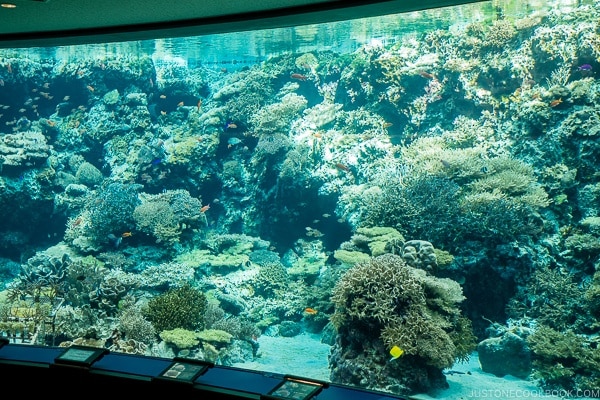 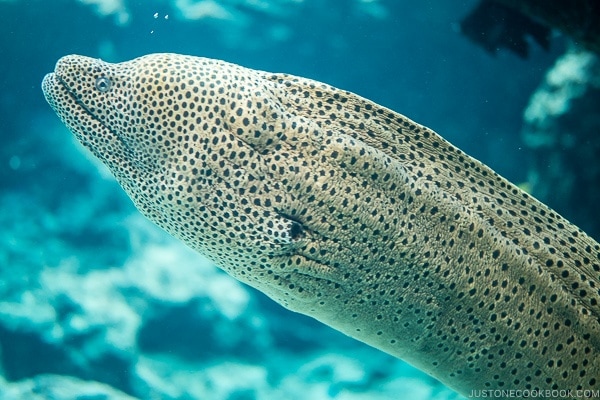 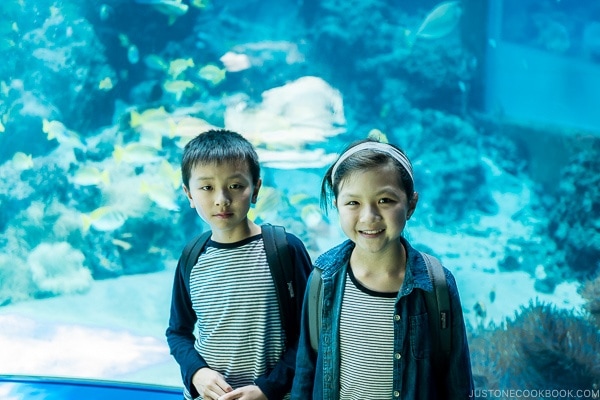 Following the tropical fish area, there’s a gallery of smaller displays featuring freshwater fish from Okinawa and other ocean creatures that lives around coral reefs. 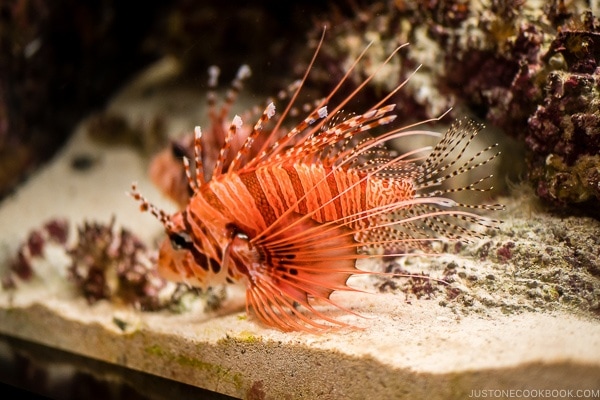 Between the Coral Reef Gallery and The Kuroshio Sea, there’s Churaumi Theater which plays movies once an hour about the ocean life near Okinawa. We encourage you to catch a movie during your visit as the ending is pretty cool.

Finally, you walk down the ramp and see the main feature, The Kuroshio Sea tank, featuring sharks, rays, whale sharks, and 70 other species.

The design for visitors to view the tank is quite ingenious. The path is designed as a zigzag sloped walkway so everyone has opportunities to get great views of the tank as they head down to the lower floor (without obstructing others’ view). 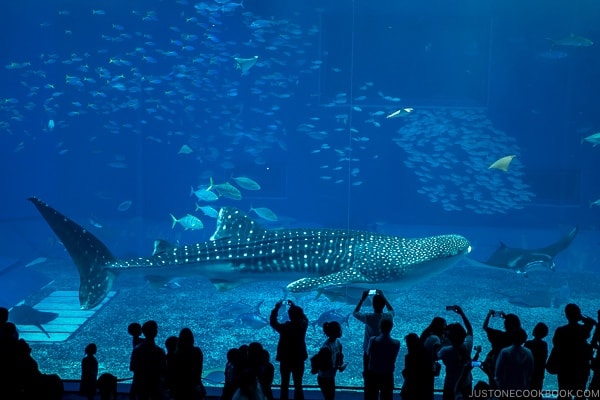 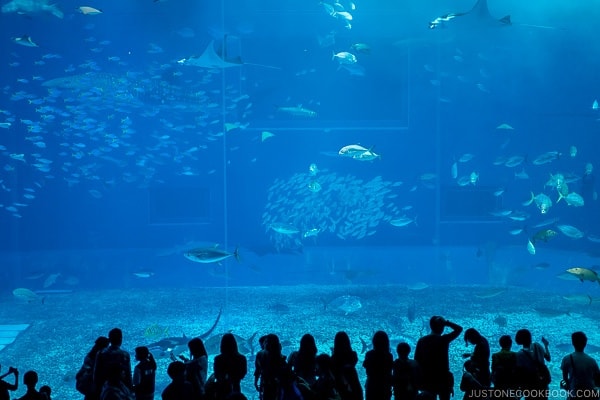 Halfway down the slope, there is a Shark Research Lab with specimens of shark and ray’s parts and information about both. There’s also a model of ancient shark’s jaw on display where the children are standing in below. 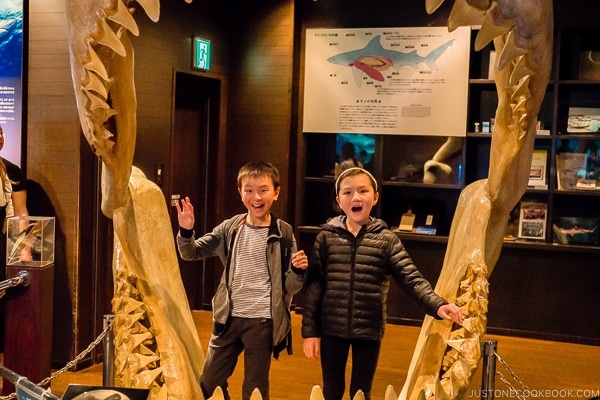 The last part of the aquarium is about the deep sea world featuring 70 species that live below 650 feet (200 meters). It was difficult to take pictures in this section since it was really dark. 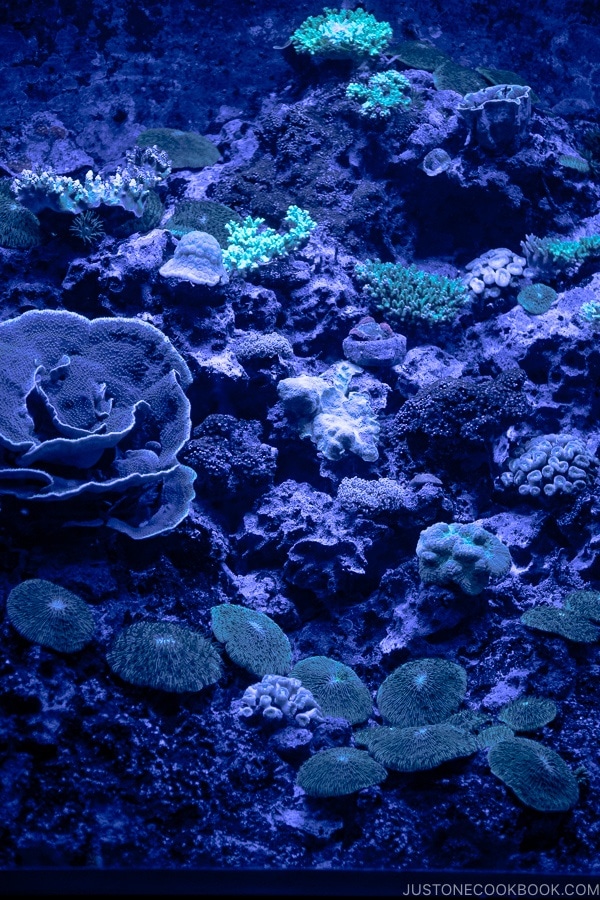 You might be wondering what’s holding the 2 million gallons of seawater back in The Kuroshio Sea tank. It’s held back by an acrylic glass that’s 603 mm (2 feet) thick which previously held the Guinness Book of Records (currently 2nd in the world).

When you exit the aquarium, you will end up on the west side of the Ocean Expo Park near the ocean. 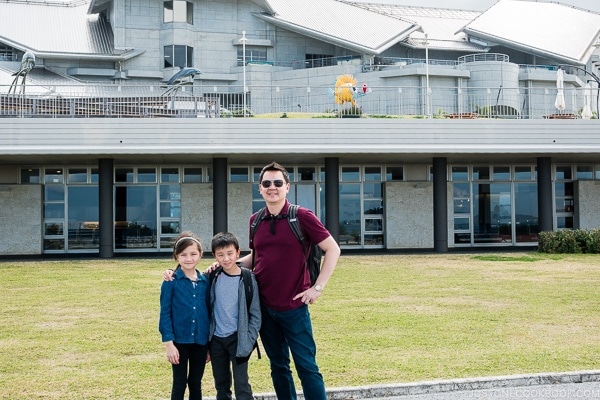 Our family had a great time at Churaumi Aquarium. A couple things surprised us, it was not as “big” as we thought. Compared to Monterey Bay Aquarium, the floor space is about one third the size. However, as there are many activities to do at Ocean Expo Park, your day will be plenty busy.