Skip to content
College Meal Easy Kid-Friendly
This post may contain affiliate links. Please read my disclosure policy for details. As an Amazon Associate, I earn from qualifying purchases.

Yakisoba is a classic Japanese stir-fried noodle dish that’s seasoned with a sweet and savory sauce similar to Worcestershire sauce. Use any proteins you like: pork, chicken, shrimp, or calamari. For vegetarians, just swap it with tofu or shiitake mushrooms.

Yakisoba (焼きそば) or Japanese stir-fried noodles started to appear in the 1930s as So-su (= Sauce) Yakisoba (ソース焼きそば). It was a popular children’s snack at the mom-and-pop candy stores (dagashi-ya 駄菓子屋 in Japanese) in the late 50s.

Since then yakisoba has been cooked and enjoyed at home and at Teishoku-ya (Japanese diners) and became an icon for Japanese street food. As it is easy to set up an iron plate teppan (鉄板), yakisoba food stalls are also very popular at school events, festivals, snack shops, etc.

Today I’ll show you how to make these stir-fried noodles at home that will taste just as good as the street stalls!

Yakisoba is a stir-fry dish made of Chinese-style wheat noodles, thinly sliced meat, and vegetables such as cabbage, carrots, onions, and bean sprouts and tossed with a thick, sweet-savory sauce. To finish off, it is often topped with a variety of garnishes.

Although the name “yaki soba” implies fried buckwheat noodles, there’s no buckwheat (soba) used in the noodles at all. In Japan, the word soba is also being used to describe noodles of any type.

Yakisoba noodles are called Mushi Chukamen (蒸し中華麺 or Steamed Chinese-style noodles). They are made of wheat flour, kansui, and water. Even though the color of the noodles is yellowish, they are not egg noodles, and the color is the result of using kansui. Yakisoba noodles are steamed and packaged, so they’re ready for a quick reheat. The texture of these noodles is similar to ramen noodles.

It’s easy to make yakisoba at home, and you can add almost any ingredients to make it your style. Try it with chicken, shrimp, or calamari, or a simple vegetarian style with mushrooms for Meatless Mondays!

There are also a few different ways of serving stir-fried noodles:

In the US, you can find yakisoba commonly included on the menu at Japanese grill teppanyaki restaurants or street vendors at Japanese Obon or cherry blossom festivals.

My Childhood Memory of Yakisoba

When I was growing up in Japan, yakisoba often appeared on our weekend lunch menu. My mom and I would prep the ingredients and everyone gathered around the Japanese hot plate (portable indoor griddle) and cook yakisoba together. It was my dad’s favorite weekend lunch. It’s also great for dinner, but personally, I always associate yakisoba with a weekend lunch dish.

My mom often changes up the ingredients used in the recipe. Instead of pork belly slices, she sometimes used Japanese sausages and ground pork, and my favorite was the combination of ground pork and squid/calamari. My mom also throws in Chinese chives (nira in Japanese)and bean sprouts for her yakisoba.

How to Make Yakisoba

Where To Get Yakisoba Noodles & Yakisoba Sauce

The two popular yakisoba noodle brands are Myojo (明星) and Maruchan (マルちゃん), and each package comes with three packs of yakisoba noodles. The noodles are already steamed, coated with oil, and packed tightly in each packet.

I recommend using the Myojo brand (see the picture above). Maruchan, if frozen, tends to break into pieces when defrosted. In Japan, yakisoba noodles are never sold frozen. However, these noodles don’t last too long and they are often sold frozen outside of the US.

You can purchase them in Japanese, Korean, and Chinese grocery stores, and they are either in the refrigerated or freezer section.

The popular Otafuku brand offers Yakisoba sauce but I actually like making yakisoba sauce from scratch (made with common condiments), so I can slightly adjust the sauce each time to make my Yakisoba taste different.

My kids told me they prefer the sauce to be slightly sweeter than my recipe below, but I’ll leave that up to you, and feel free to add more sugar.

1. Use a Large Cookware

It’s important to use a griddle or a wok or a cooking pan with a large cooking space so that your ingredients have direct contact with the hot surface. The nice char will add fantastic flavors and give the noodles a “street food” character.

I like using this griddle when making yakisoba at home. It is also fantastic for Okonomiyaki and all sorts of pancakes!

When comes to any stir-fried dishes, we want to retain the fresh texture and crunch of the vegetables. So it is important to stir-fry the hard vegetables first before adding other softer ingredients. Each vegetable has a different cooking time, so cook quickly and in succession. Do not throw everything at once. Also, do not overcook as wilted veggies are a no-no for stir-fries.

3. Do Not Add A Lot of Veggies and Protein

This is after all a noodle dish. It’s tempting to toss in lots of veggies or extra meat. Adding too many ingredients will end up steaming the noodles. You need to let the steam escape, so the noodles are not wet, and preferably make it as dry and crispy as possible. If you prefer drier-style noodles (I prefer mine to have some moisture), fry the noodles first, then transfer them out before cooking the vegetables and meat/ tofu. That way, you don’t have to cook the noodles later on, and the noodles will still stay crispy.

4. Loosen Up the Noodles Before Cooking with the Rest

I recommend loosening the noodles quickly before adding them to the stir-fried ingredients. If you don’t, you will most likely break up the noodles into small pieces on the griddle or wok.

The way to do it is to loosen up the noodles with your hands and get rid of the oil under warm water. Drain well, and then toss with the stir fry vegetables. The noodles will still have enough moisture, but won’t be soggy due to the excess water.

I hope you have fun cooking yakisoba at home! This is the dish that will transport you to the summer festival in Japan.

Can I use ramen noodles instead of yakisoba noodles?

Yakisoba noodles are already steamed and greased. When you reheat them, the texture of the noodles will become tender.

Ramen noodles are fresh noodles (生麺) that are uncooked. Therefore noodles are dusted with flour and they needed to be cooked first. If you boil the noodles and try to use them for yakisoba, the noodles will be broken into pieces. Therefore, I’d recommend steaming the noodles instead of boiling them. However, I’ve heard it’s a bit tricky as you have to adjust the cooking time based on the thickness of ramen noodles.

Can I make chicken yakisoba?

Chicken is probably the most popular protein used in the U.S. and I get this question often. Although chicken is not commonly used as a protein choice for yakisoba in Japan, you can certainly use it. I recommend using chicken thighs rather than breasts because thighs are more flavorful and don’t get dry easily. 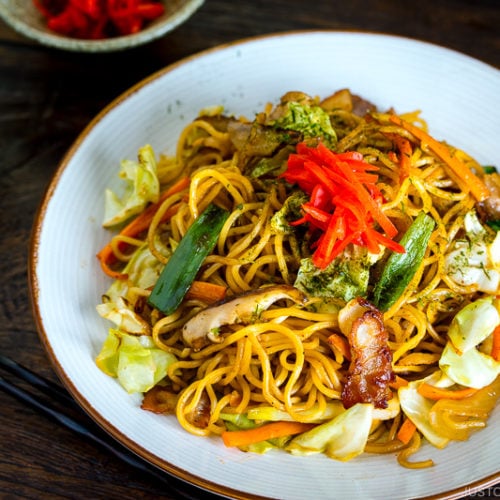 4.83 from 298 votes
Yakisoba is a classic Japanese stir-fried noodle dish that’s seasoned with a sweet and savory sauce similar to Worcestershire sauce. Use any proteins you like: pork, chicken, shrimp, or calamari. For vegetarians, just swap it with tofu or shiitake mushrooms.
Print Recipe Pin Recipe

For the Toppings (Optional)

To Make the Yakisoba Sauce

To Make the Yakisoba