Skip to content
Easy Kid-Friendly Sandwich
This post may contain affiliate links. Please read my disclosure policy for details. As an Amazon Associate, I earn from qualifying purchases.

Mixed Sando (short for “sandwiches”) is a classic set menu item for Japanese sandwiches made with soft and tender Japanese milk bread. They’re found at cafes, restaurants, bakeries, and konbini (convenience stores) all across Japan. Home cooks make them for their children’s bentos and family picnics, too. Here, I show you three popular types of fillings: Tuna salad, tamago (egg salad), and ham and cheese with lettuce.

Japanese sandwiches like Katsu Sando and Tamago Sando have found their spots in today’s food world and pop culture. But as you may have guessed, there’s more to discover! Today I’m introducing one of the most classic sandwiches that should be on your radar: Mixed Sando (ミックスサンド).

Tucked inside fluffy slices of crustless bread and served as a set, these sandwiches are perfectly simple yet unmistakably comforting and nostalgic. Let’s make mixed sando at home!

What is Japanese Sandwich ‘Mixed Sando’?

Mixed sando (ミックスサンド) typically refers to three different sandwiches served as a set. Nothing fancy, but it is a standard style of sandwich in Japan. The fillings include:

Both tuna and egg sandwiches are soft and creamy. The ham, cheese, and lettuce sandwiches add a nice crisp contrast. Together, they make a tasty combo that is well-balanced in texture, taste, and visual.

You can find mixed sandos everywhere: at cafes, restaurants, grocery stores, bakeries, and konbini (convenience stores). Because they are satisfying and nutritious, Japanese home cooks also love making these mixed sandwiches for their children’s bentos and picnics.

How to Make Mixed Sando

Types of Sandwich Bread You Need

One distinct characteristic of Japanese sandwiches is the use of Shokupan (Japanese Milk Bread).

How is it different from the western style loaf of sandwich bread? Shokupan is known for its milky-sweet taste, incredibly fluffy texture, and pillowy softness. There is a lightness to the bread, which I think defines the essence of Japanese sandwiches.

I used Black Sesame Shokupan for this mixed sando recipe, but you can certainly use plain white shokupan.

If you really don’t have access to Japanese milk bread but still wish to make the recipe, go for the fluffiest, softest white bread you can find.

When I was growing up in Yokohama, Japan, the popular local bakery called Pompadour had mixed sandos made with black sesame milk bread. I have major cravings for sandwiches, so I made one for this recipe.

The black sesame seeds add a lovely nutty and earthy taste to the soft milk bread. If you have tried the classic plain shokupan, you need to make this black sesame version today as it is the next-level bread for Japanese sandwiches.

What to Serve with Japanese Sandwiches 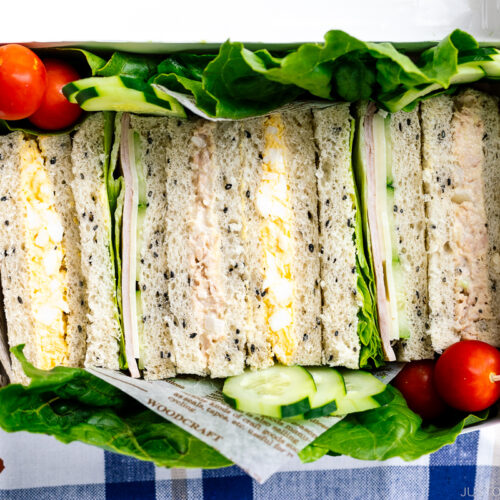 For the Tuna Salad

For the Egg Salad

For the Ham and Cheese Filling

To Make the Tuna Salad

To Make the Egg Salad

To Assemble the Sandwiches