Dressed in a delicious sesame sauce, this Pounded Burdock Root (Tataki Gobo) is a popular dish appeared in Osechi, Japanese New Year Food, which is said to bring good luck.

We eat gobo (ごぼう) or burdock root all year round. You can find it frequently appears in miso soup, Kinpira Gobo, and Gobo Salad. On Oshogatu, the New Year’s holiday celebration on January 1st, this Pounded Burdock Root with Sesame Sauce or Tataki Gobo (たたきごぼう) is served along with the Japanese New Year feast (Osechi).

Gobo is the Japanese name for burdock root. Originating from the Siberian region of Northern Asia and in use as a vegetable in Europe during the Middle Ages, it is particularly popular in Japanese cuisine and Chinese herbal medicine.

The root is sweet, mild, and earthy with a taste similar to artichoke, and most of the flavor comes from right below the skin. Therefore, instead of peeling the skin, we “shave off” the thin layer of skin with the back of a knife.

It is one of my favorite root vegetables along with lotus root. In Japanese cooking, gobo is used in soups, simmered dishes, rice dishes, salad, and deep-fried dishes.

Burdock root or gobo is a deep root that grows straight down into the ground which symbolizes stability for the house and family. Therefore, it’s considered one of the auspicious foods eaten during the Japanese New Year.

Tataki Gobo is a traditional Japanese New Year’s dish where burdock root is cooked, pounded, and dressed with sesame sauce. It is one of the top 3 dishes for the New Year in the Kansai region (Osaka area), but not as popular in the Kanto region (Tokyo area).

Why do we need to pound the burdock root? The burdock root is pretty tough and fibrous, even after cooking. Therefore, we smash the root and break down fibers, which allows the sauce to go through the fibers of the burdock root. Pounding also makes the root easier to chew, even for children!

Burdock root is known for its many health benefits, such as multiple types of powerful antioxidants. Not only for the New Year’s celebration, but we should also enjoy this root vegetable all year round, especially when it’s in season from fall to winter.

Burdock root’s white flesh can oxidize after it is peeled. To prevent it from turning brown and to remove any astringent taste, we typically submerge the root in water with a little bit of vinegar. The burdock flesh turns pale in color, and since red and white are the colors of celebration in Japanese culture, it is recommended to use vinegared water.

2. Toast the sesame seeds before using

Even though the package of your sesame seeds says “Toasted” or “Roasted” sesame seeds, I still recommend toasting the sesame seeds in an empty frying pan until fragrant. The additional toasting releases the oil and brings out the nutty flavor even more.

When the burdock root is still hot, quickly dress it with the sesame sauce. It will absorb more flavors than when it’s cooled. I’m not sure if it’s old wives’ tale that has passed down to generations, but I think there is some science behind this (or I would like to think that way). 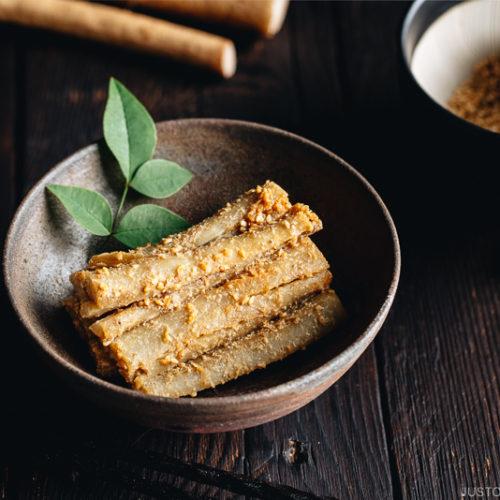 To Dress with Sesame Sauce

To Serve and Store