Skip to content
Japan Kyushu
This post may contain affiliate links. Please read my disclosure policy for details. As an Amazon Associate, I earn from qualifying purchases.

Located at the southern tip of Kyushu, Kagoshima is known for its fabulous food and the neighboring active volcano Sakurajima. Explore the city with us as we learn its rich history and visit the beautiful Japanese garden Senganen. 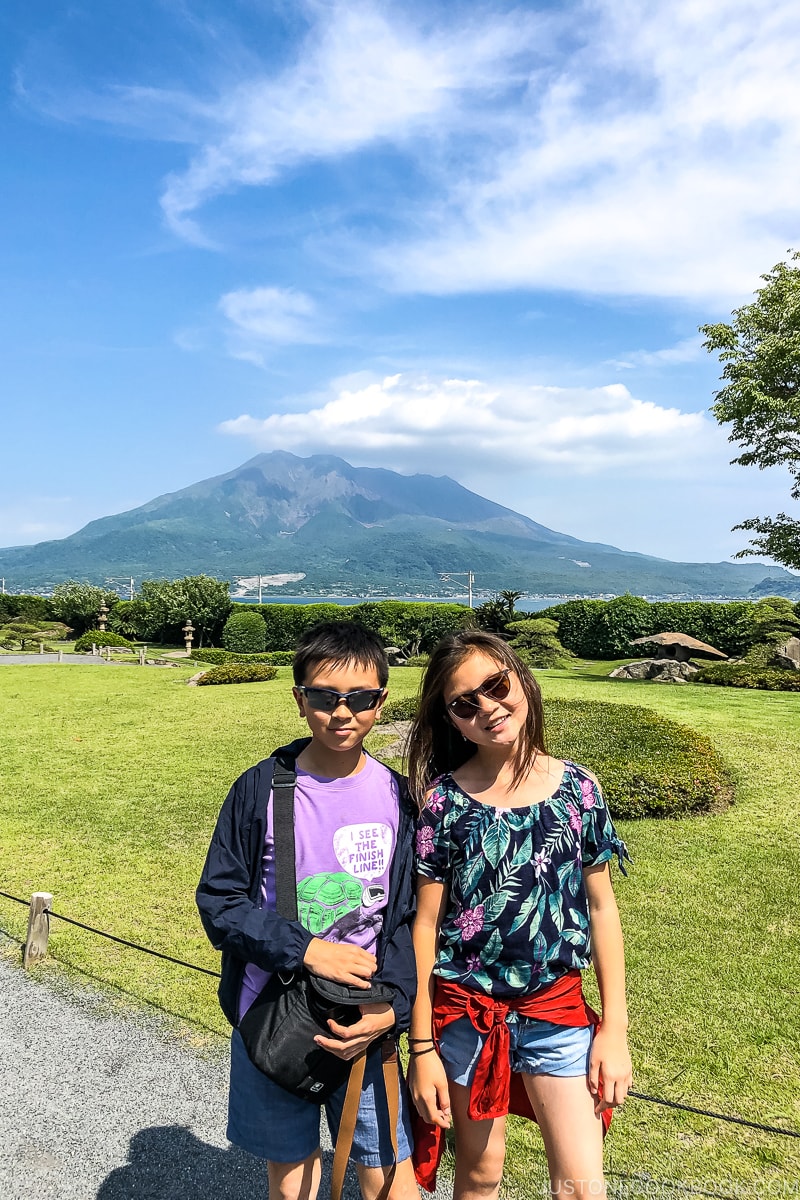 Kagoshima is famous for fabulous food and drinks (shochu), the active volcano Sakurajima, Sengan-en garden, and its rich local history tied to the Satsuma Rebellion. We spent 1 day in Kagoshima after visiting Yakushima and toured the many sites in the city. Ready to join us? Let’s go!

Kagoshima is located on the southern end of Kyushu and the fastest Shinkansen from Tokyo will take almost 7 hours. If you’re traveling from Tokyo, flying is the best option since it takes only 1 hour 40 min flight and the cost is similar to Shinkansen. From Osaka, it’s about 4 hours to Kagoshima on the Shinkansen.

We arrived in Kagoshima on the hydrofoil from Yakushima (2 hr ride). It was our first time riding on the hydrofoil and quite an interesting experience. Even with choppy waves, the ride was super smooth with the boat going quite fast (50 mph/80 kph).

Why Go to Kagoshima

Kagoshima is not a large city but there is plenty to see and do. For a more easygoing trip, plan on a 3-day visit that will allow you to experience majority sites of the city, which includes hiking on Sakurajima. Our 1-day trip was way too short.

When you are in Kagoshima, you will see and hear the term “Satsuma” (薩摩) quite often. The Kagoshima area prior to Meiji Restoration (around 1868 when the imperial rule was restored in Japan) was long ruled by the Shimazu family for almost 800 years. The area Shimazu ruled was called Satsuma Domain. Therefore, Satsuma is used frequently especially for local food and craft such as Satsuma beef, Satsuma chicken, Satsuma-age, and Satsuma Kiriko.

One of the highlights of Kagoshima is its fresh food and regional cuisine, especially its beef, kurobuta (Berkshire pig), and Satsuma chicken. Besides meat, Kagoshima is also famous for eel and many kinds of seafood.

All the foods were excellent and we were not disappointed. The lunch course set that covers the main dish, sashimi, Satsuma-age, and various side dishes ranged from $20-30 USD.

After lunch, it’s time to burn off some calories and walk around the expansive Japanese garden Sengan-en. Sengan-en was built by the Shimazu family (also written as Shimadzu) in 1658 and offers spectacular views of Sakurajima and Kagoshima Bay. The traditional garden also includes a villa lived by the Shimazu family.

Being early adopters of western knowledge, the Shimazu family played an important role in bringing industrial technology to Kagoshima. One such technology was the reverberatory furnace built by Shimazu Nariakira to melt iron. 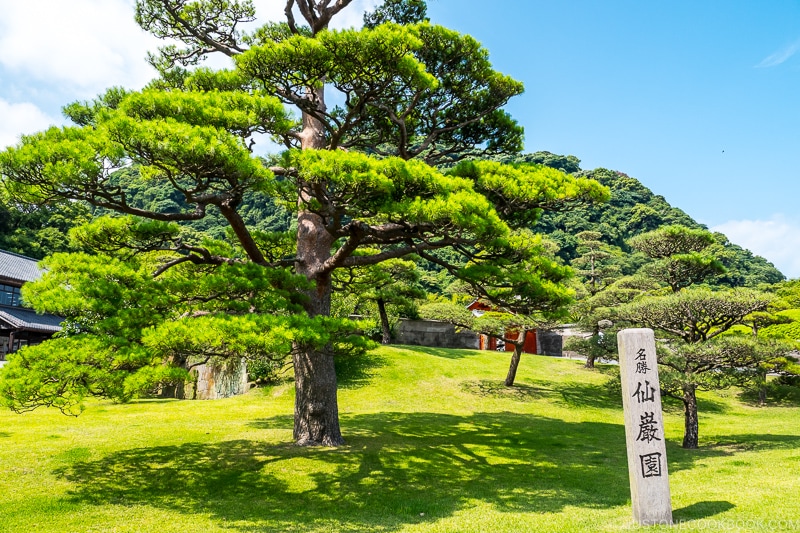 In the north end of the garden is the villa used by the Shimazu family. It was used as a state guest house to receive foreign guests in the 19th and 20th centuries. The house is fairly large and visitors can walk through the halls and see the exhibitions inside.

From Sengan-en, we took a taxi back to central Kagoshima. The driver was very kind and offered to take us to the popular sites within the city so we were able to see quite a bit in a short time.

Our next stop is the Terukuni Shrine. One of the most influential leaders in Kagoshima’s history was Nariakira Shimazu 島津 斉彬 (1809-1858). He was responsible for leading the industrialization and modernization efforts in the area, including ironwork, glassmaking, westernized military training, and shipbuilding. 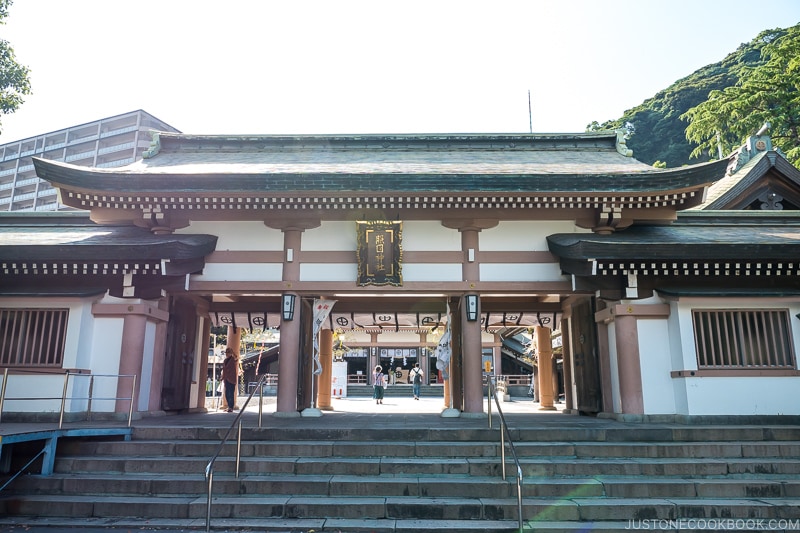 Nariakiria Shimazu was so revered he was enshrined at Terukuni Shrine. A rare honor bestowed by the emperor.

Just a few blocks away from Terukuni Shrine is the large 8-meter statue of Saigo Takamori. Saigo Takamori is a legendary figure in the Kagoshima area and sometimes referred to as the last true samurai.

There are many stories about Saigo Takamori’s life and many movies (The Last Samurai) and dramas made about him. The short version is that he was a close adviser to Shimazu Nariakira, and a war hero for the imperial government helping take down the ruling Tokugawa shogunate. With his military accolades, he played important roles for the Meiji government including the responsibility to organize the national army and leading the imperial guards as a general. 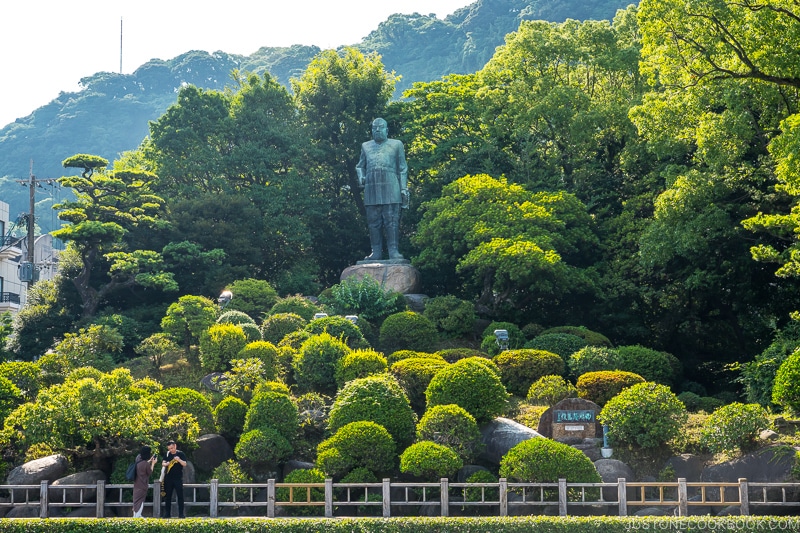 Later on in life, Saigo Takamori disagreed with the imperial government’s policies and left to go back to Kagoshima to retire. In early 1877, he came out of retirement and became the leader of the Satsuma Rebellion against the Meiji government. The battles raged on until Sept and he lost his life at the Battle of Shiroyama.

Besides the statue, other significant Saigo Takamori landmarks include Saigo’s cave, his death place, and his cemetery.

Not far from the statue, up the hill on Shiroyama are the caves where Saigo spent the last days of his life retreating from the imperial military. 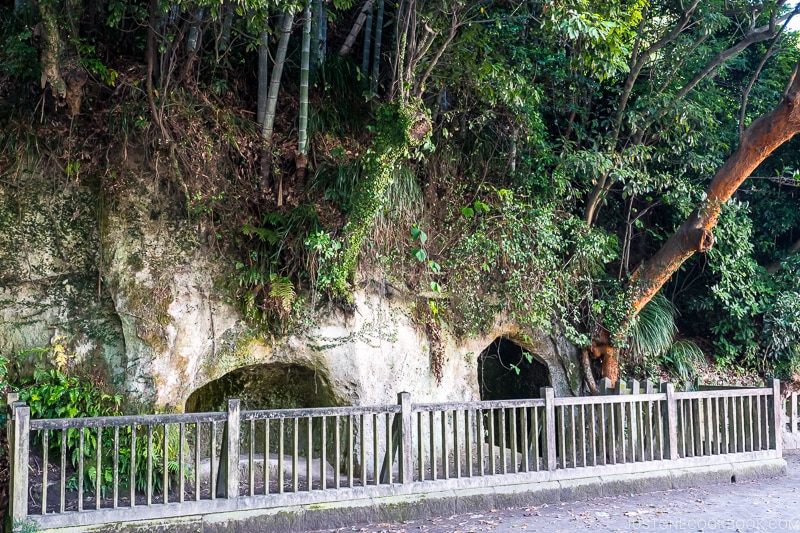 After being hit by bullets during the battle of Shiroyama, Saigo asked his follower to cut off his head subsequent to his warrior’s suicide. Visitors can stop by the landmark today to pay respect.

Lastly, there’s a museum dedicated to Saigo’s life and personal belongings near his cemetery. The cemetery contains Saigo’s remains along with his comrades who lost their lives in the Satsuma Rebellion.

To take in the view of the city, head up to Shiroyama Park Observation Deck. The observatory has a walking trail for visitors to take in the views of Kagoshima and the surrounding area from 350 feet (107 meters) up. 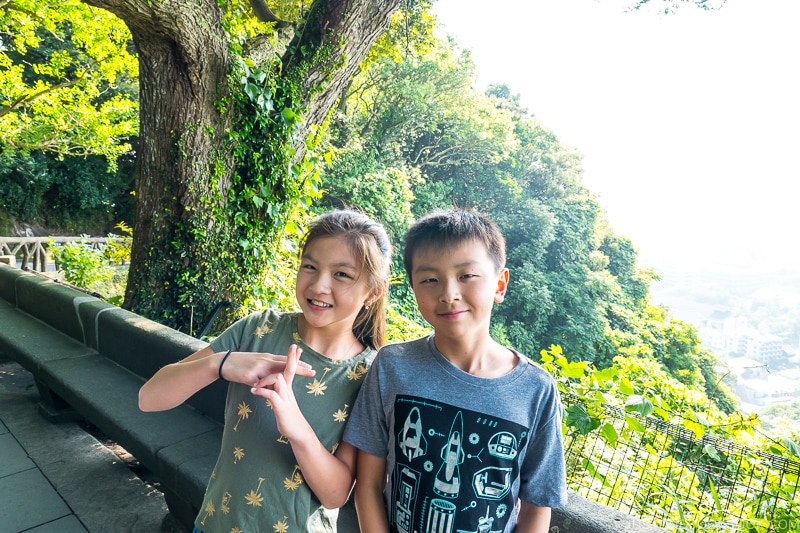 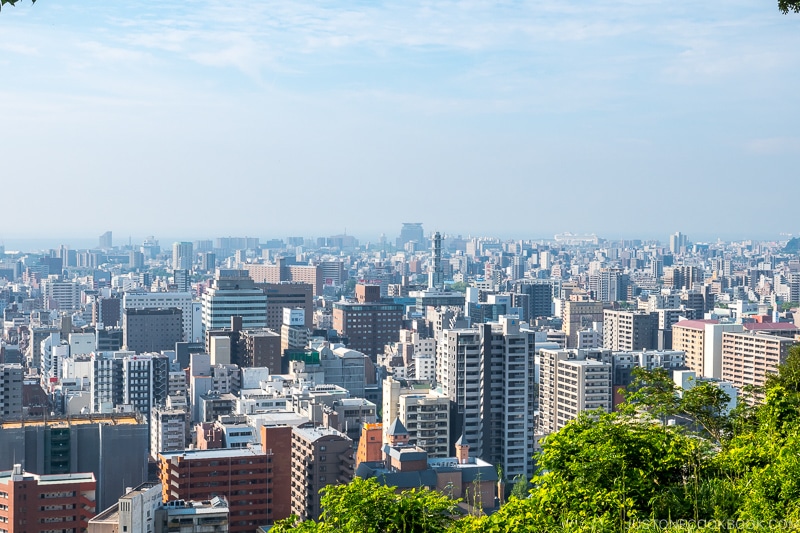 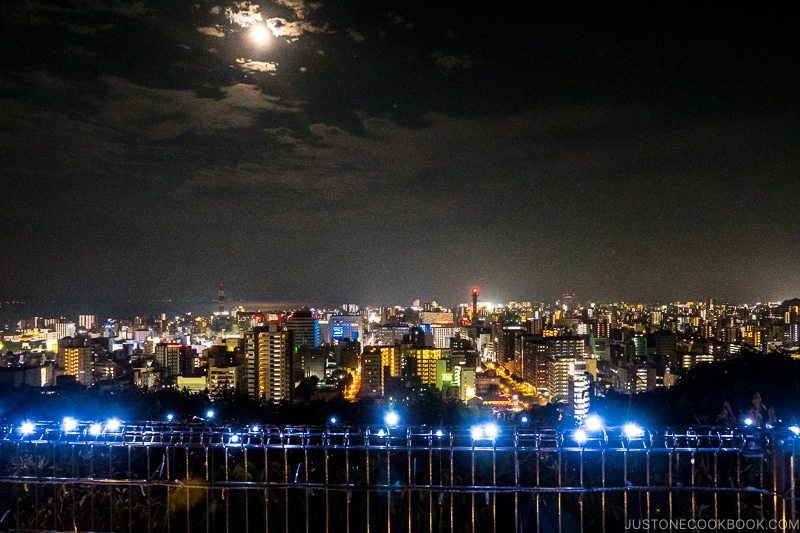 If you are looking to buy souvenirs or gifts on your trip, head over to the Tenmonkan shopping district (天文館). You can find all types of retail shops and restaurants here. Make a quick stop at Yamagataya (山形屋), the famed department store founded in 1751.

Another area for shopping is right around Kagoshima Chuo station, with many restaurants, shops, and plaza nearby. 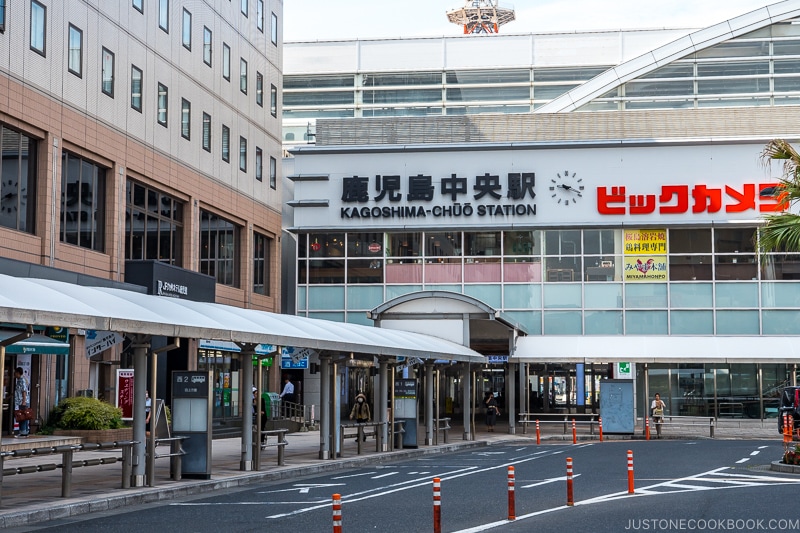 We didn’t have a chance to visit Sakurajima during our trip but many visitors stop by this active volcano for a day trip. Visitors can hike and sightsee from various observation points on Sakurajima. The ferry runs frequently between Kagoshima and Sakurajima. 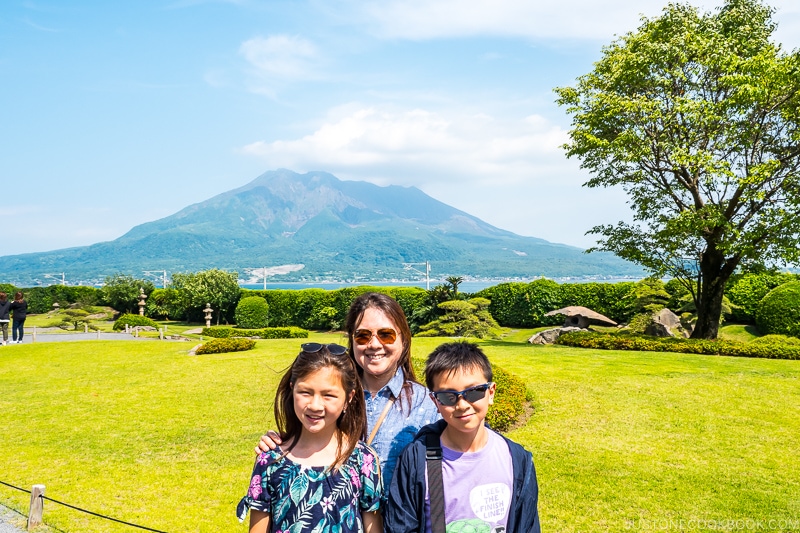 We stayed at Shiroyama Hotel during our visit to the city. The hotel is located on top of Shiroyama and many of the rooms have a great view of the city.

Our stay included a kaiseki dinner which was decent, but not superb. We had higher expectations for one of the nicest hotels in Kagoshima. 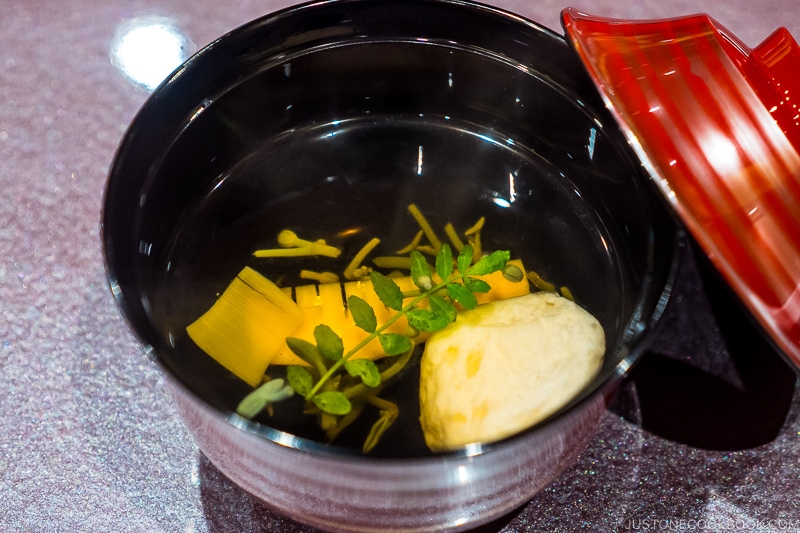 However, breakfast at Shiroyama Hotel was one of the best we’ve ever had. There are over 50 items available for the breakfast buffet and the quality was amazing for the incredible selections they offered!

We hope you enjoyed the quick tour of Kagoshima. There are so many parts to the city we didn’t get to experience so we hope to go back one day. The next part of our trip we’ll be heading north to see the colorful ceramics in Arita and Imari. 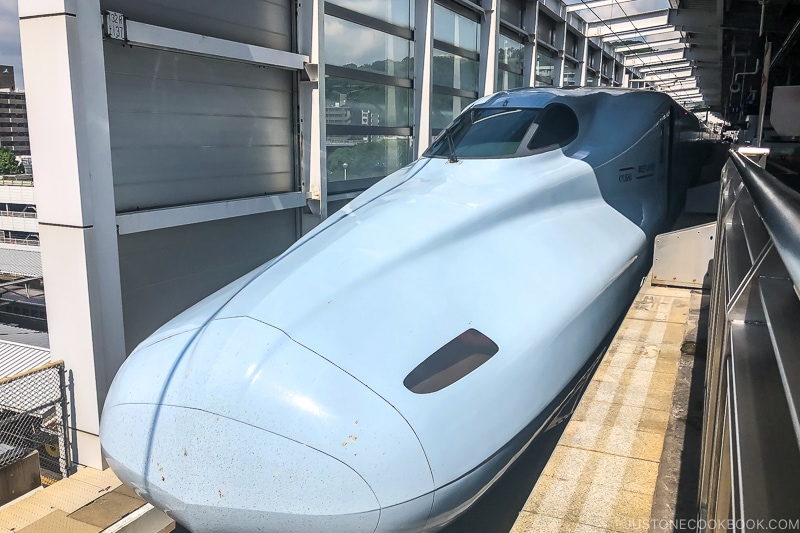