Skip to content
Japan Nikko
This post may contain affiliate links. Please read my disclosure policy for details. As an Amazon Associate, I earn from qualifying purchases. 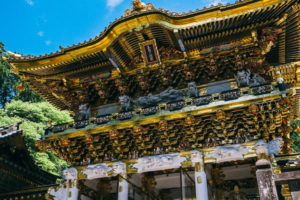 The ornately decorated Nikko Toshogu Shrine was built in 1636 to enshrine Tokugawa Ieyasu. The colorful buildings set in a deep green forest is a must-see when visiting Nikko. 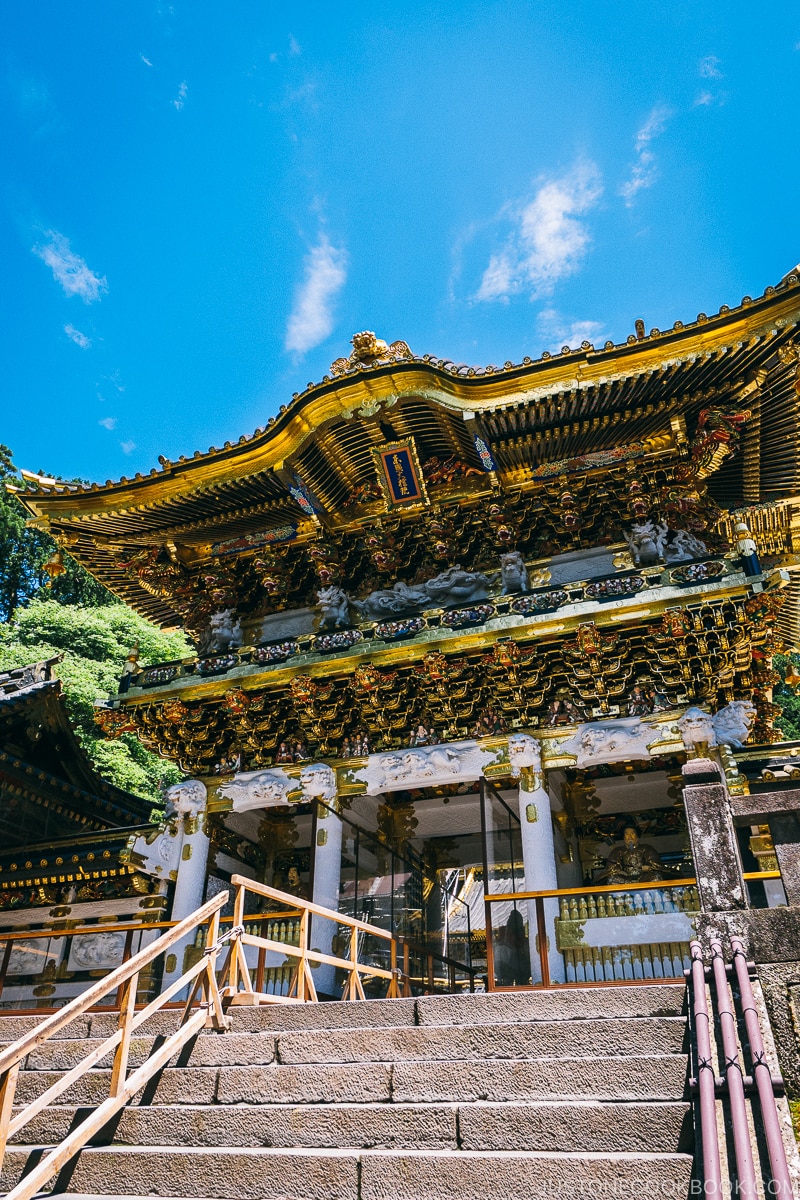 Nikko is a beautiful area to visit in Japan and it’s the home to many shrines and temples with historical importance. Among all the sites, it is best known for the lavishly decorated Nikko Toshogu Shrine. It is part of Nikko UNESCO World Heritage Site along with Futarasan-jinja Shrine and Rinnoji Temple.

Where is Nikko Toshogu Shrine

Nikko is about 2.5 hours by train or 2 hours by car north of Tokyo. If you want to take the train there, from Tokyo, take the Nikko-Kinugawa Line from Kitasenju Station to Tobu-Nikko Station. Once in Nikko, you can take the World Heritage Sightseeing Bus for 500 yen (day pass) to get to the popular sites. You can get off at Daiyuin Futaarasanjinjamae Bus Stop or Omotesando Bus Stop to get to Nikko Toshogu Shrine. 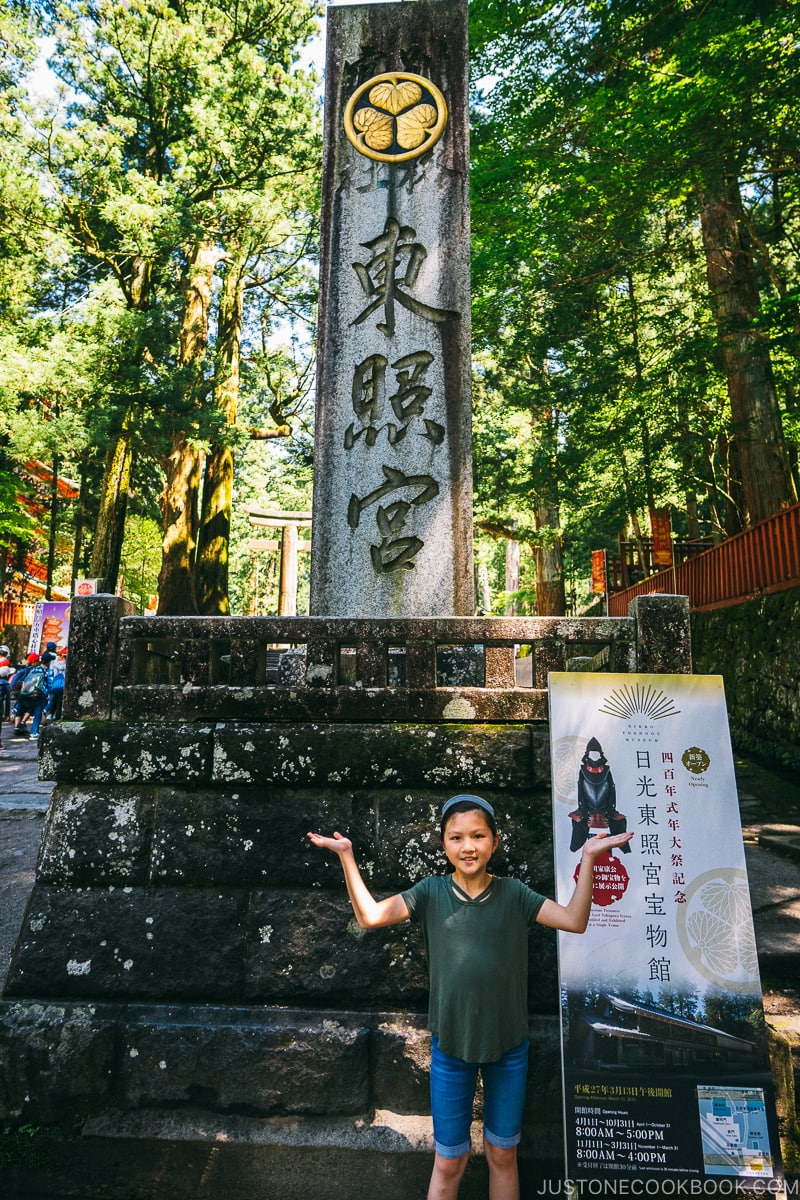 Day 3 in #Nikko: We visited Toshogu, Rinnoji, Akechidaira Ropeway, and Kegon Falls. And Mr JOC lost his belonging AGAIN!! More on IG/FB Stories (and will cover travel details in our travel posts). #jocinjapan

The Toshogu Shrine in Nikko was first built by his son the second shogun (Tokugawa Hidetada) in 1617 but additionally made extravagant by his grandson (Tokugawa Iemitsu). It stands out from other Shinto shrine with its elaborate carvings and grandiose colors with the generous use of the gold leaf. The cost to build the shrine’s buildings would cost 400 million dollars (40 billion yen) today.

You may have seen other Toshogu Shrine around Japan and it’s because a Toshogu is any Shinto shrine in which Tokugawa Ieyasu is enshrined. During the peak, there were over 500 Toshogu and now it’s roughly 130 in Japan. Generally, Nikko Toshogu Shrine is considered one of the three great Toshogu in Japan along with Kunozan Toshogu and Senba Toshogu in Kawagoe (仙波東照宮).

The shrine covers a large area so I’ll divide it into four parts for this guide:

Many of the buildings at Nikko Toshogu Shrine are designated as Japan’s National Treasure or Important Cultural Property.

As visitors approach Toshogu, the first structure they see is the impressive stone torii gate (鳥居) that dates back to 1618. The stones for the gate came all the way from Kyushu in the south.

Right past the Stone Torii Gate is the Five-Story Pagoda with elaborate carvings and vibrant red color. The original pagoda was built in 1648 but lost to a fire. The current one was built in 1818. The pagoda is usually not open to visitors.

Follow the stone pathway and make you way up the steps to the Front Gate. The Front Gate houses two deities and is called the Nio Gate (仁王門) and typically found at Buddhism Temple. Before the end of the Edo Period and Meiji Restoration, Buddism and Shinto were intertwined in Japan. You’ll see signs of Buddhism at the older shrines in Japan but not the new ones.

Once through the Front Gate, you’ll approach the Three Sacred Storehouses (upper, middle, and lower). These storehouses are where you can see some of the famed carvings including the Three Wise Monkeys (see no evil, hear no evil, and speak no evil) and Imagined Elephants. The storehouses are modeled after Shosoin Imperial storehouse at Todaiji in Nara.

Continue following the path and you’ll pass through a smaller torii gate and steps leading to The Main Shrine. 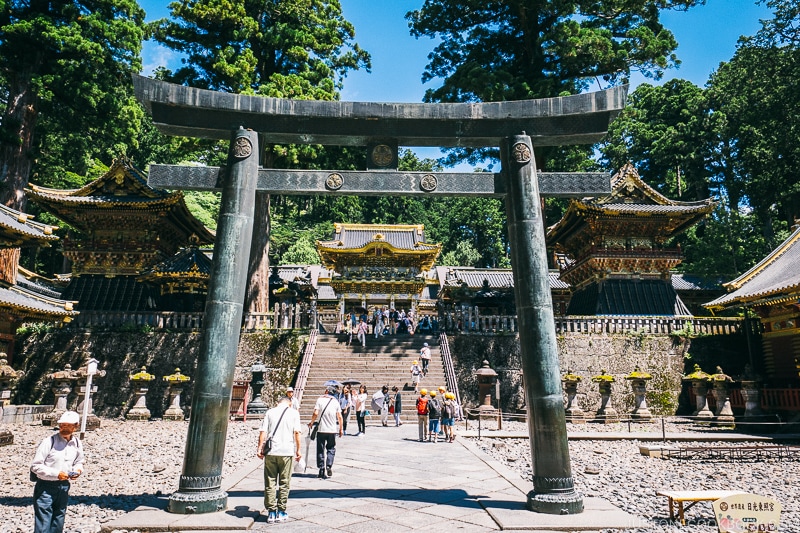 You will notice there are many stone lanterns on the shrine grounds (121 lanterns made of different materials) and specifically the ones in front of the Yomeimon Gate were donated by lords who fought alongside Tokugawa. The lanterns donated by the lords who he had defeated are generally placed further away from the gate. 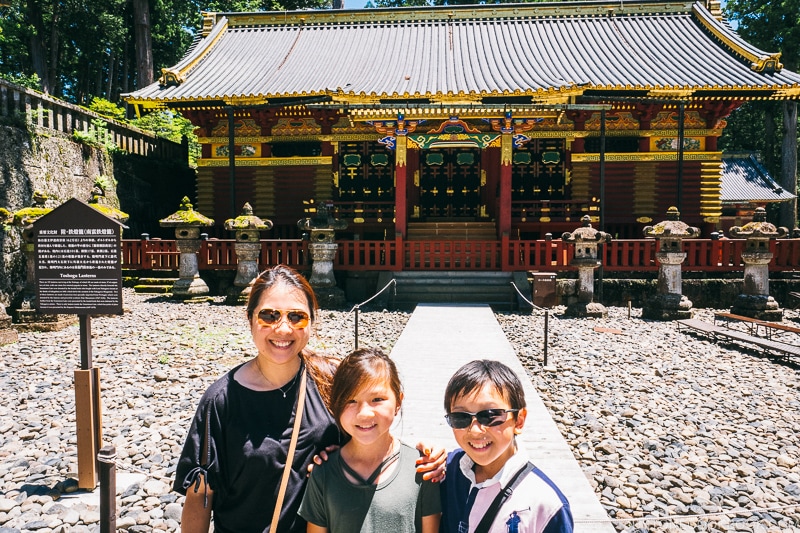 Head up the steps and you will approach the famed Yomeimon Gate to the Main Shrine, furthermore pay attention to the detailed carvings. It is known as one of the most intricate and grand shrine gates in Japan.

There are over 508 carvings on the gate including those of dragons and mythical beasts and additionally, carved figurines telling the achievements of Tokugawa Ieyasu. 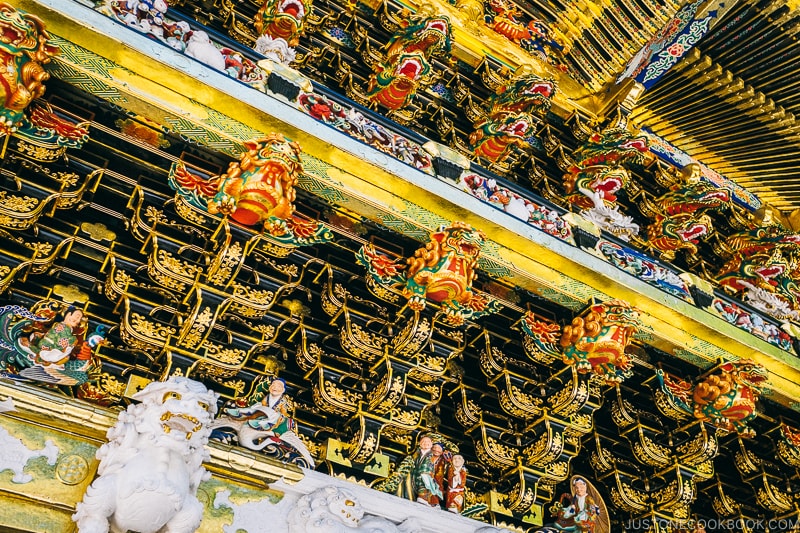 When you pass through the Yomeimon Gate don’t forget to look up to see the painting of the dragon. 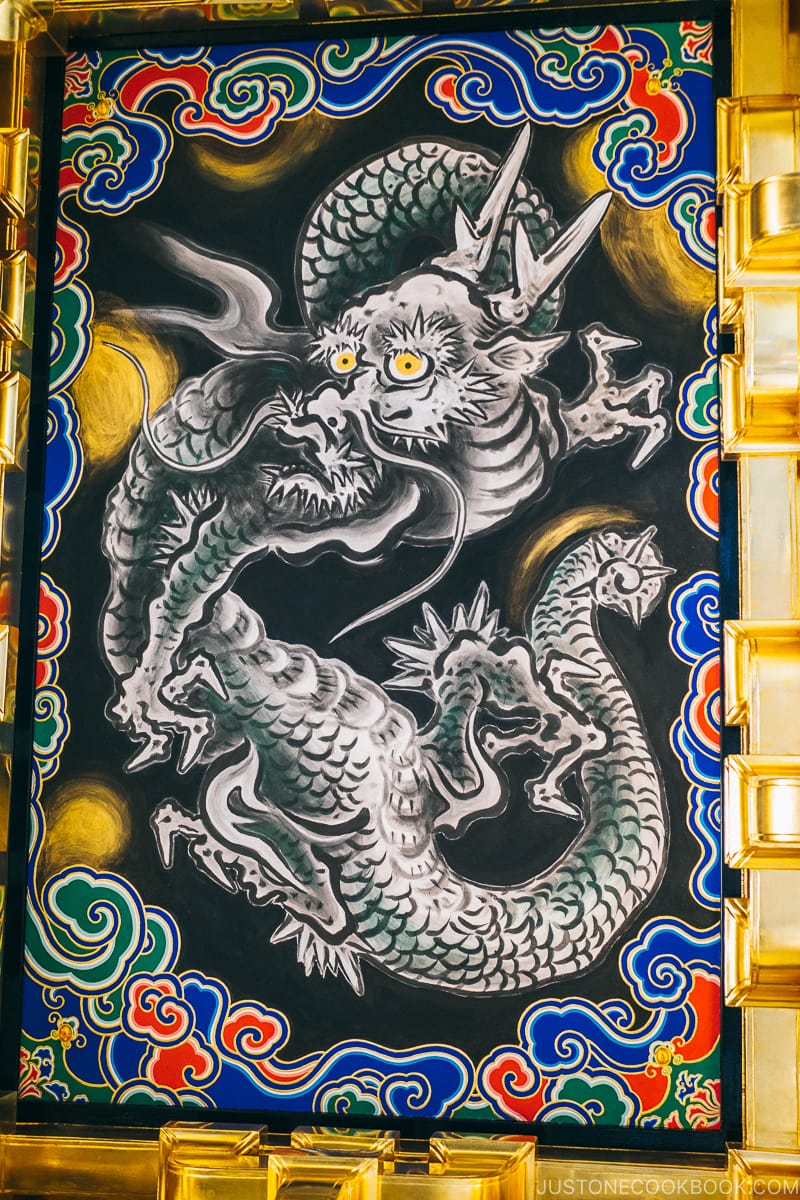 No photos are allowed inside The Main Shrine.

Additionally, at the main shrine area, there’s a building to the left that houses three portable shrines. The portal shrines are used during spring and autumn Shuki-sai Togyo-sai Grand Festival. The central shrine is for Tokugawa Ieyasu, the other two are for Toyotomi Hideyoshi (who unified Japan) and Minamoto-no-Yoritomo.

After checking out the portable shrines, head up to the Inner Shrine and the Tomb. The path is to the right of the main shrine. Here you’ll pass through a few more gates and under the famed carving of the sleeping cat, Nemurineko. 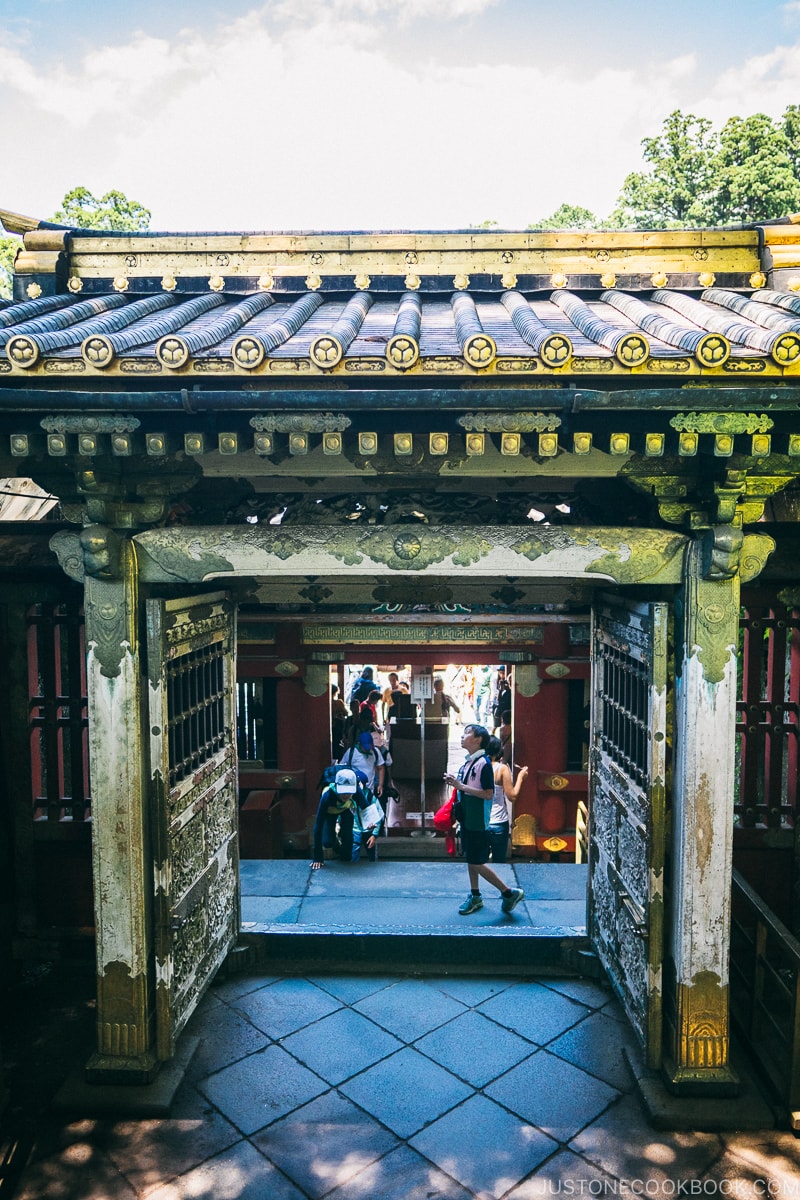 The Inner Shrine and the Tomb

To get to the Inner Shrine, you’ll have to climb up 207 stone steps each carved from a single block of stone. The rails on the right are also made from single blocks of stone. There’s no other way up so keep in mind if you have young children or elderly with you during your visit. 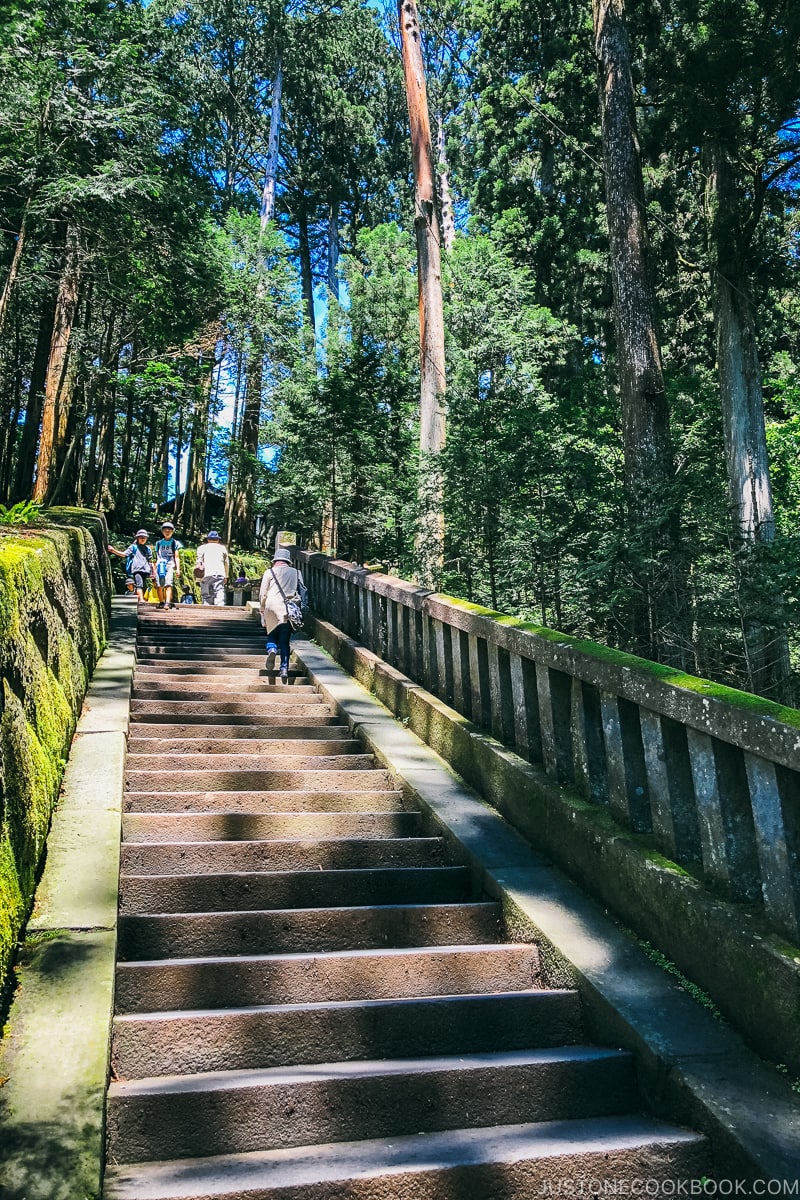 At the top of the steps lie a bronze torii gate and the Inner Shrine. 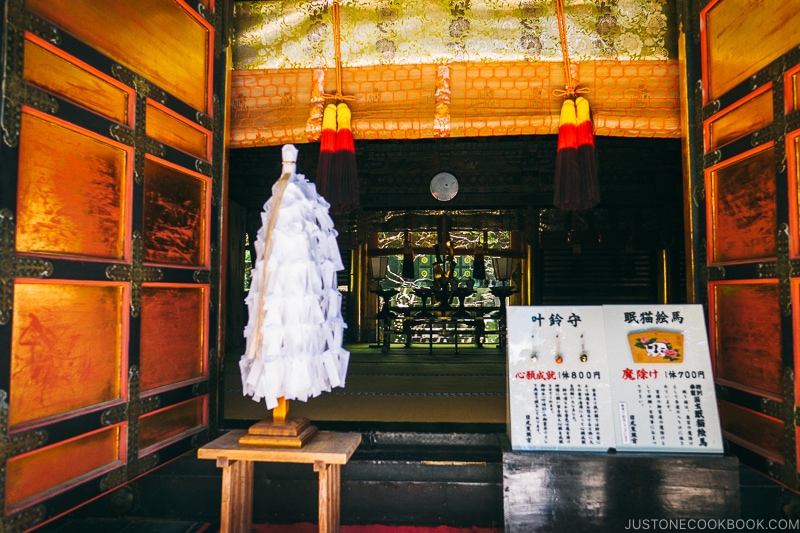 Finally, right behind the Inner Shrine lies the grave of Tokugawa Ieyasu underneath the Inner Shrine pagoda. Visitors are not allowed to be close to the pagoda but there’s a path that goes around to get a good view.

As you leave the Main Shrine through Yomeimon Gate, you will see Yakushido Temple (crying dragon) to the right. Check out the large painting of the dragon on the ceiling. While you’re in there a priest will clap two pieces of wood which will result in a crying sound (can only be heard below the Dragon’s head). 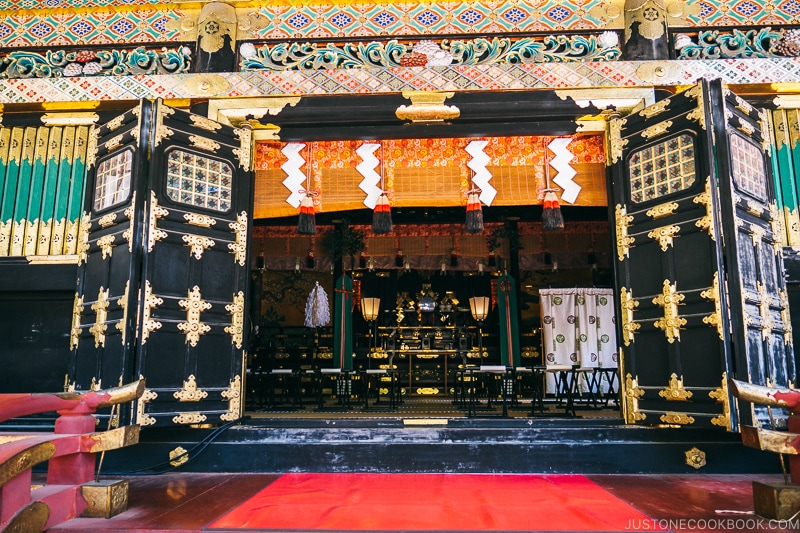 Near the shrine ground is the Nikko Toshogu Museum. There are items related to Tokugawa Ieyasu on display but the museum is fairly small. We would recommend skipping if you have other plans. There is an additional fee to view the museum gallery. 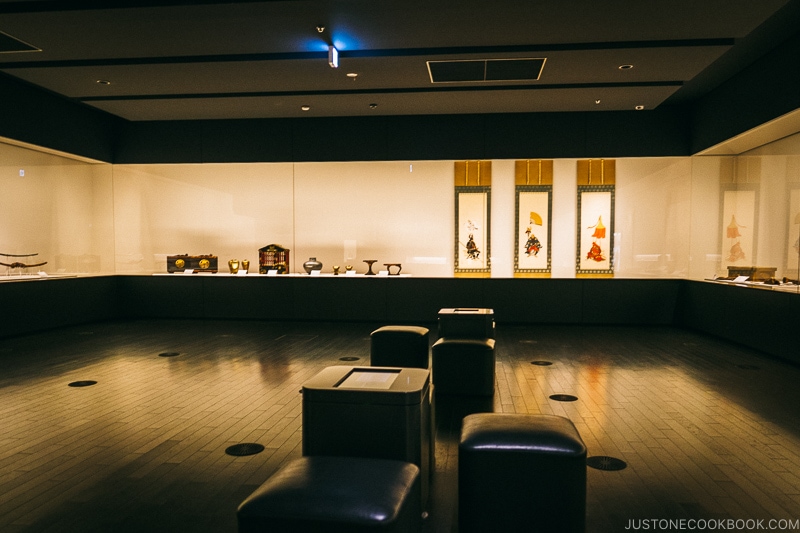 Where is Tokugawa Ieyasu Really Buried

Nikko’s Toshogu is known for its grand and beauty but most importantly it’s the grave of Tokugawa Ieyasu, one of the most important men in Japan’s history. What we were surprised to learn recently is that contrary to the popular belief, Tokugawa Ieyasu’s grave might not be in Nikko at all.

On our visit to the Shizuoka area, we stopped by the Toshogu in Kunozan (hiking up over 1,000 steps) and found out that it is probably Tokugawa Ieyasu’s real grave. Neither shrine is willing to dig up their graves to find out the truth but right now it’s assumed Kunozan is the real grave. We’ll share our visit to Kunozan in a future post.

Thank you for reading our guide on Nikko Toshogu Shrine and we hope it was interesting for you. It’s a beautiful shrine and takes a bit of time to enjoy so get there early in the day before all the tour buses and crowds show up. We’ll take you around the other popular sites in Nikko in our next post.