Skip to content
College Meal Easy Kid-Friendly
This post may contain affiliate links. Please read my disclosure policy for details. As an Amazon Associate, I earn from qualifying purchases.

Need a family meal ready in under 20 minutes? Try this quick and easy Japanese Ketchup Spaghetti, known as Napolitan. Home cooks all across Japan prepare this simple recipe that elevates pantry staples with fresh ingredients like sausages, mushrooms, onion, and bell pepper. It’s a savory and satisfying dish!

Ketchup in spaghetti?! You hear it right. The idea of spaghetti with ketchup sauce may make any Italians cringe. However, Japanese Ketchup Spaghetti, or what we call Spaghetti Napolitan (スパゲッティーナポリタン), has been a popular menu at cafe restaurants (Kissaten) since the 50s. This comforting pasta dish always brings a nostalgic memory to many Japanese who grew up eating it.

Napolitan is tomato ketchup based Japanese-style pasta that consists of spaghetti noodles, onions, green bell peppers, button mushrooms, and Japanese sausages. There are a few variations where sausages are replaced with bacon or ham, but in general, it all has a standard sunny look of appetizing orange.

Phonetically, the Japanese language doesn’t distinguish R and L as separate sounds; for that reason, it uses the same katakana characters to represent R and L sounds of Western alphabets. So it can be written as Napolitan or Naporitan: The spelling “Naporitan” is derived from romanji (the romanization of Japanese), while the spelling “Napolitan” takes the origin of the name (Napoli) into account.

There are a few theories of how Napolitan originated. The strongest theory is that it originated in Yokohama during the postwar era.

Around the 1950s, the head chef at the New Grand Hotel in Yokohama created this recipe after being inspired by the spaghetti and tomato sauce dish served to the American military. Since tomato sauce was a rare ingredient at that time, ketchup was used as a substitute for pasta. He then named it “Spaghetti Napolitan”, or Napoli, after Naples, Italy.

Around the same time, Japan started to open itself to the world and new ideas from the west were considered fashionable. These newly westernized dishes like Spaghetti Meat Sauce and Spaghetti Napolitan received excellent responses that they became mainstays in the cafes and Japanese home kitchens. To this day, the two dishes are still two of the most popular pasta dishes among Yoshoku (western-influenced food, 洋食) in Japan.

Ketchup As The Key Flavoring

Japanese cuisine has been using ketchup in flavoring various dishes as this all-star American condiment lends a deep depth with its sweet-tangy profile.

You can find ketchup being used in Japanese Curry, Omurice, Ebi Chili, and a pasta dish like Spaghetti Napolitan. It’s a great example of how open we are when it comes to adapting other cultural influences in improving our own cuisine.

Why You’ll Love This Pasta

The genius about Spaghetti Napolitan is that it utilizes most of the pantry staples in your kitchen. The common ingredients include onion, mushrooms, green bell peppers, and sausages (ham or bacon). It’s seasoned with ketchup and Parmesan cheese and served with Tabasco sauce.

It’s really flexible too! Try bacon in place of sausage. Use peas in place of bell pepper. Top it with a fried egg if you’d like. But simple is good for this recipe. When you don’t have any of the ingredients in the recipe, you can throw in whatever happens to be in-season or on-hand in your kitchen.

To make it vegetarian-friendly, leave out the meat and add more mushrooms. Mix it up with a different type of mushrooms for texture and flavor.

This dish is really easy to make and the flavor is kids-friendly. It makes an ideal meal for a quick dinner if you have a family with young children. I remember my son used to request this Ketchup Spaghetti when I asked what kind of pasta he would like for lunch.

It cannot be easier to put this Spaghetti Napolitan together! For a fancy yet effortless weeknight dinner, serve it with a green salad and wine. Enjoy!

I’ve partnered with a great ceramic online shop from Japan called Musubi Kiln. You will get 10% off with a coupon code JUSTONECOOKBOOK for your purchase. In this post, I’ve used: 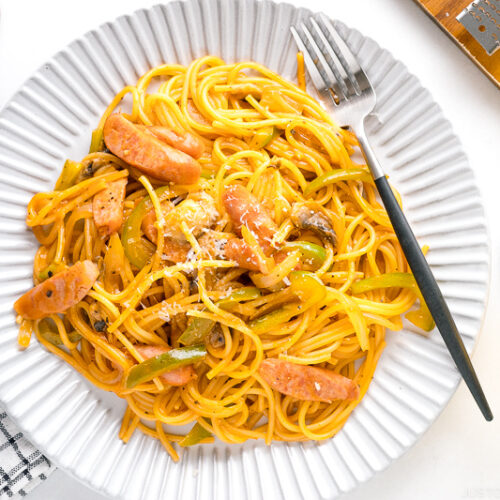 4.69 from 116 votes
Need a family meal ready in under 20 minutes? Try this quick and easy Japanese Ketchup Spaghetti, known as Napolitan. Home cooks and cafe restaurants all across Japan prepare this simple recipe that elevates pantry staples with fresh ingredients like sausages, mushrooms, onion, and bell pepper. It's a savory and satisfying dish!
Print Recipe Pin Recipe

To Boil the Spaghetti

To Cook the Sauce