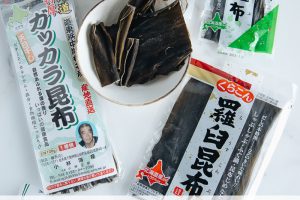 Kombu is a kelp seaweed and the cornerstone of Japanese cuisine, including dashi (Japanese soup stock), sushi rice, and hot pot. It’s also rich in nutrients and umami.

Kombu (昆布) is a seaweed widely consumed in East Asia. Known for its excellent source of glutamate, an amino acid responsible for umami, it plays an indispensable role in Japanese cuisine.

Kombu belongs to the brown algae family. The Japanese use the seaweed by steeping it in water to extract the natural umami essence. This essence or dashi is the foundation of many Japanese dishes. It resembles deep olive-colored leaves and may be covered with white powder, also known as glutamic salt.

While making kombu dashi takes minutes, its production is a much longer and more rigorous process. Kombu is farm-raised in a nursery where the top leaves are cut off so that the root can regrow. The leaves are laid out on the rocks to dry, then compressed to release the remaining moisture. Some varieties are further dried indoors to mature. Hokkaido is a major producer, cultivating 95% of Japanese kombu.

There are many different types, and each has slightly different flavors and textures. Ideally, you would use a specific variety for its characteristics.

Characteristics: 1-8 meters in length, 12-30 centimeters in width. It’s a light brown color with a thick and wide wedge shape. It’s used in the Osaka area and is the most popular type.

Characteristics: Narrower and harder than Ma Kombu. The base of the leaf is a thin wedge. More or less ruffled on the margins. The color is dark brown, which also imparts a dark color to the broth, and the leaves are stiff. It is cultivated off the coasts of Rishiri island (far northwest of Hokkaido).

Suggestions: Great for dashi and soups including Hot Tofu (Yudofu), pickling vegetables such as senmaizuke

Characteristics: 2-7 meters in length, 6-15 centimeters in width. Dark greenish and blackish color. It is tender and easy to cook once rehydrated and thus, also eaten in various dishes. Slightly more affordable in price. It is widely used in Tokyo and northern Japan.

Characteristics: 1.5-3 meters in length, 20-30 centimeters in width. A hin and wide variety that hails from the town of Rausu. It’s also used in kobujime (昆布締め), a technique that preserves raw fish or vegetables between kombu sheets and to make kombu tea. It’s called “the king of (kombu) dashi.”

While kombu dashi is the primary use, there are many ways of eating it.

The primary usage for kombu is to make the Japanese soup stock called Kombu Dashi, which is the base of miso soup, noodle soup, and many other dishes. To make kombu dashi, you reconstitute pieces of kombu by soaking or heating them gently in water (do not boil). To boost the umami, you can add other umami sources such as katsuobushi (bonito flakes), dried shiitake mushrooms, or iriko (dried baby sardines).

Kobujime is a technique where raw fish or vegetables are layered between kombu sheets to impart flavor to the ingredient. At sushi restaurants, you may encounter kobujime of white fish or oily fish like mackerel.

Tororo Kombu is the thin shavings of kombu. It’s rich in flavor and can be eaten with rice balls, as a garnish to Hiroshima-style Okonomiyaki, soba, or udon.

Tsukudani (佃煮) is a sweet soy sauce-based simmer of kombu and other umami-rich ingredients. It’s a rice accompaniment.

You can add small strips of kombu to Japanese pickles (漬物) for an additional umami flavor.

Kombucha (昆布茶, “kombu tea”) is dried and powdered kombu. Not only can you dissolve the granules in hot water for tea, but I also use this in Unagi Chazuke and many other recipes.

You can find kombu packaged in strips. It comes with a thin layer of whitish substance on the surface, which gives the umami. It’s not dust or mold, so don’t wipe off or wash the strips before use.

You can purchase bags at Japanese and Asian grocery stores. Whole Foods, gourmet markets, and natural food stores also carry it in the Asian food aisle. Alternatively, you can buy good quality kombu from here that ships internationally.

How to Choose the Best

As mentioned above, the Japanese differentiate its use for various dishes. If you use it daily, it may make sense to buy large bags. Smaller bags with short strips may be convenient if you don’t use kombu frequently.

Buy kombu imported from Japan and check the expiration date. Even though it’s dried food, it can go bad if it’s not shipped properly, so check that the bag hasn’t been damaged.

It’s sensitive to heat, direct sunlight, and humidity. Store opened bags in an airtight container or ziplock bag (I use this OXO container). It’s essential to keep it in a dry, cool, dark place. You can keep it for a year. If you have older kombu, check to see if they are any mold growth. If it looks and smells fine, you can use it as long as it’s less than two years old.

FYI: Seaweed Farming & The Current Trends in the U.S.

In recent years, there have been many fishermen, scientists, and consumers in the west, particularly in the U.S., who see kelp and kelp farming as a solution to environmental sustainability. Once an exotic ingredient to the Americans, kombu kelp has been accepted as a promising source of food, jobs, and a solution to clean ocean waters.

To watch: CBS 60 Minutes reports on seaweed farming and its surprising benefits

As well as being the best source of glutamate, kombu also contains high levels of iodine, which is essential in a wide range of bodily functions, including metabolism, bone health, and immune response. It is also a great source of dietary fiber and contains several enzymes that can break down complex sugars in the stomach that are usually indigestible.

It’s also rich in minerals and vitamins such as calcium, iron, magnesium, potassium, vitamins A and C, and the trace minerals copper and zinc.

To learn more about the surprising health benefits, read Discover Seaweed: The Essential Ingredient of the Japanese Diet.

Note: You might see a Prop 65 warning label on the kombu product. Kombu doesn’t cause cancer specifically; however, seaweeds (kombu, nori, hijiki) grown in Japan are harvested in water containing high traces of heavy metals than seaweeds harvested elsewhere. Some health agencies have especially issued warnings against consuming hijiki, which contains a higher amount of inorganic arsenic than other seaweed. But there is no ban elsewhere on hijiki or any other seaweed. All kombu contain traces of organic arsenic, but not in harmful quantities, unless you consume more than the usual amount of kombu daily. In California, companies must label a Prop 65 warning on their products.

As it joins the rank of a superfood, many vegetarians and vegans are starting to incorporate kombu kelp and other seaweeds in their cooking.

Did you know the amino acids found in kombu can help break down heavy starches in food like dried beans? This allows for easy digestion and helps minimize the gas-producing effects of beans. It is especially great news for vegetarians and vegans as beans are one of the main food groups.