Skip to content
Easy Kid-Friendly Make Ahead
This post may contain affiliate links. Please read my disclosure policy for details. As an Amazon Associate, I earn from qualifying purchases.

A classic, home-cooked dish for over one hundred years, Japanese Potato Salad is distinct because of its colorful addition of fresh vegetables, creamy texture, and rounded flavor. It’s the ultimate crowd-pleaser!

Summer cookouts and holiday get-togethers are where potato salads typically shine, but this recipe for Japanese Potato Salad (ポテトサラダ) is one I enjoy making year-round. In Japan, it shows up in bento boxes, convenience stores, and even as a bar snack at izakaya.

Today, let’s learn how to make this classic, all-Japanese potato salad that will be loved across ages.

What is a Japanese Potato Salad?

It may surprise you when I say potato salad has been a popular menu item in Japan for at least 125 years. That’s right!

As with many other yoshoku dishes (such as Curry Rice, Croquettes, and Tonkatsu), potato salad is thought to have made its first appearance during the Meiji Era (1868-1912). After a Japanese chef supposedly tried to recreate the popular Eastern European Olivier Salad (also known as Russian Salad), this Japanese version quickly gained popularity.

What Makes It Different?

German and American potato salad recipes are often vinegar-based with tender chunks of waxy potatoes and ingredients like mustard, bacon, and fresh parsley or chives. But in the Japanese version, you will find a variety of colorful ingredients including carrots, corn, hard-boiled eggs, cucumber, and ham.

The vegetables add sweetness and substance to the salad, and the simplicity of seasonings delivers a balanced flavor. There is less of an acidic base because of the absence of vinegar.

Every family in Japan has its own take for the potato salad, and that’s one of the many things I love about it. You can add other ingredients of your choice (e.g., onion, peas, string beans, apple, or canned tuna), and it will be just as nutritious and eye-catching.

The potatoes are almost completely mashed (but I recommend leaving a few chunks), so the texture is creamy. Most importantly, the key difference in flavor comes from the type of mayonnaise we use (more on this below).

Most of the ingredients for this potato salad can be found in a regular supermarket. However, to make it distinctly Japanese, I highly recommend using Japanese mayonnaise, which adds a rich and tangy component that can’t be substituted. You can find the famous, red-capped squeeze bottle of Kewpie mayo in most Asian grocery stores, but if you have a little bit of time, try this homemade version of Japanese mayonnaise!

Much like potato salads in the US, Japanese potato salad is a popular party dish. It has the perfect balance of rich, tart flavors with a touch of sweetness and a pleasant variety of textures.

What to Serve with Japanese Potato Salad

The versatility of this salad can’t be beaten, and for that reason, it’s a dish that can be paired with just about anything. Some other ways I like to enjoy Japanese Potato Salad are alongside Karaage (fried chicken) or Hambagu (Japanese hamburger steak).

If you’re having a barbecue or attending a potluck, you can find a list of Japanese recipes here that go perfectly with this potato salad.

It’s rare that we have leftovers of this dish in my house, but when we do, I love making these Potato Salad Pork Rolls. 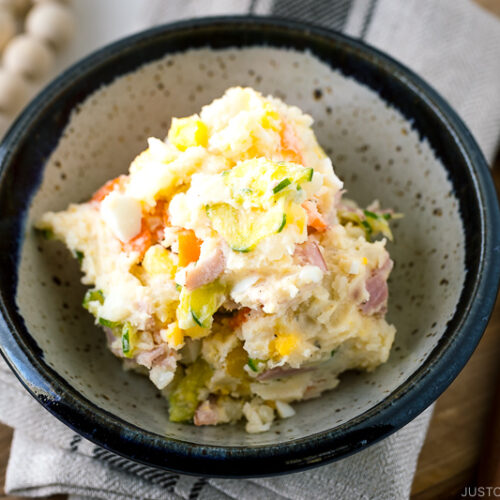 4.68 from 195 votes
A classic, home-cooked dish for over one hundred years, Japanese Potato Salad is distinct because of its colorful addition of fresh vegetables, creamy texture, and rounded flavor. It's the ultimate crowd-pleaser!
Print Recipe Pin Recipe

To Prepare the Potatoes

To Prepare the Other Ingredients