Skip to content
Chicken Classic Washoku Easy
This post may contain affiliate links. Please read my disclosure policy for details. As an Amazon Associate, I earn from qualifying purchases.

Ozoni (Japanese New Year Mochi Soup) is one of the most popular and important dishes of Osechi Ryori, or traditional Japanese New Year foods. The preparation varies by region and household; this variation with a clear, dashi-based broth comes from the Kanto region in Eastern Japan. Enjoy this hearty mochi soup with chicken and seasonal vegetables for breakfast on New Year’s Day.

Ozoni (お雑煮) is a mochi soup that we eat along with Osechi Ryori (traditional dishes) on New Year’s Day in Japan. The preparation for ozoni varies both by household and region.

Unlike white miso-based Ozoni enjoyed in western Japan (Kansai, Shikoku, and Kyushu regions), clear dashi-based soup is the mainstream in Tokyo and eastern Japan (Read this post to learn some of the differences between eastern and western Japan.).

As each family has its own recipe, there are often colorful ingredients added like fish cakes (kamaboko), dried shiitake, and the carrot that is cut out in a pretty flower shape (here’s how to make it).

Some of the key ingredients for ozoni – such as komatsuna, yuzu (citrus), and mitsuba (Japanese parsley) – can be hard to find outside of Japan and you might need to substitute or skip.

If you’re in the U.S., first check out large Japanese Japanese supermarkets like Nijiya, Mitsuwa, and Marukai, where they usually fully stocked for New Year’s ingredients.

If you’re interested in Kansai-style Ozoni with white miso, check out the video and recipe with step by step pictures.

Living outside Japan, it’s hard to recreate an authentic Oshogatsu (New Year’s Day) experience; however, I do try my best to keep the Oshogatsu spirit going with Japanese New Year’s decorations around the house, otoshidama (monetary gifts), and food.

Have a happy, healthy, and prosperous New Year! 良いお年を！ 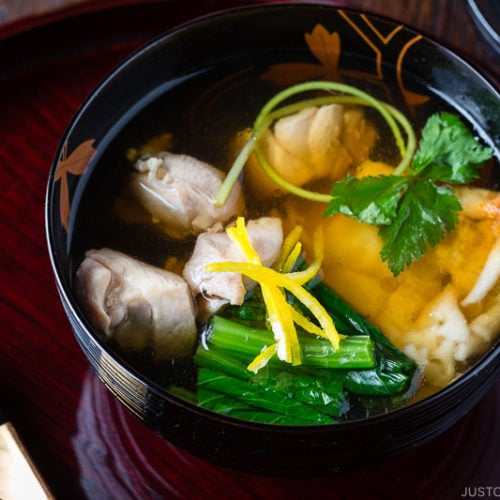 To Cook the Soup

Editor’s Note: This post was originally published on December 26, 2015. It’s been republished in December 2021.