Kansai-style Ozoni is a special miso-based soup enjoyed in the morning on New Year’s Day in Japan. Ozoni usually includes mochi (rice cake) and is one of the most iconic dishes of Osechi Ryori, or traditional Japanese New Year foods. The preparation varies by region and household; this adaptation of my mom’s plant-based recipe includes leafy green vegetables and optional yuzu peel.

Ozoni is a special soup that we eat in the morning on New Year’s Day in Japan. It usually includes mochi (rice cake) and the preparation varies both by household and region.

There are numerous regional variations in Japan but we usually divide into two types – Kanto (Tokyo area) style and Kansai (Kyoto area) style.

Over 400 years ago, round mochi was commonly used throughout Japan. However, as more people started to live in the Tokyo area, it was too much work making the mochi into the round shape by hands. Therefore big mochi cake was cut into small squares and they became the common shape in the Kanto region.

As I mentioned earlier, this new year soup not only varies by the regions but also by each household.

My mother lived in Osaka before she moved to Tokyo for college. Her mother’s family was originally from Kyoto and her dad’s family was from Nara. Therefore, my mom’s family grew up eating Kansai-style Ozoni. On the other hand, my dad grew up in Tokyo eating Kanto-style Ozoni till he met my mom.

So, my mom’s ozoni is a mix of both, with the Kansai-style base. It includes 5 ingredients: satoimo (taro root), daikon, Kyoto style carrot (it’s red more than orange), toasted round mochi, and tofu. She uses Saikyo Miso (white miso from Kyoto).

For my version, I add leafy green vegetables (komatsuna or spinach) and yuzu peel, both of which are the common ingredients for Kanto-style ozoni. The green color to the soup makes it prettier and I also like to add the fragrance of yuzu peel if I was lucky enough to get fresh yuzu.

My children didn’t like ozoni when they were little, but now they love the Kansai-style and I’m so excited that we can enjoy this traditional food as a family.

If you’re interested in Kanto-style Ozoni with white miso, check out the video and recipe with step by step pictures.

Use of Saikyo Miso

If you are new to Saikyo Miso (西京味噌), it’s different from regular white miso and it’s naturally sweet.

The sweet flavor is similar to amazake (甘酒). This sweetness comes from the sugar produced through the fermentation process. Saikyo miso is made in Kyoto and it’s usually more expensive than regular miso. You might have tasted this special miso if you had fish called Gindara Saikyo Yaki (or known as Miso Cod here in the US). You can find saikyo miso in a Japanese supermarket. 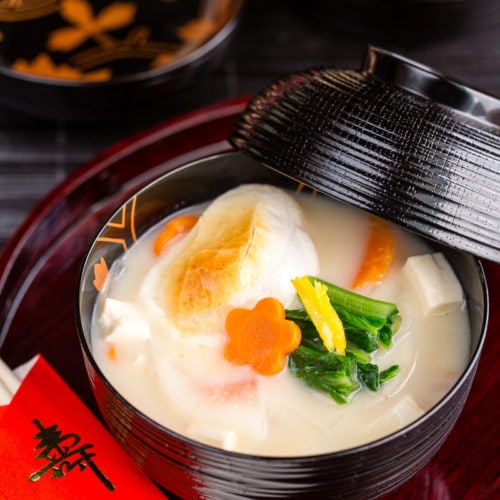 For the Kombu Dashi

To Make the Kombu Dashi

To Cook the Soup

Editor’s Note: This post was originally published on December 28, 2014. It’s been republished in December 2021.