Skip to content
Party Food Under 30 Minutes Under 5 Ingredients
This post may contain affiliate links. Please read my disclosure policy for details. As an Amazon Associate, I earn from qualifying purchases.

Smoky, fun, and super addicting, these blistered shishito peppers make the best appetizer to serve with your summer dishes! Roast these Japanese peppers in a dry skillet until deliciously charred and flavor them with a simple ginger soy sauce. It’s full of umami and simply sublime. You’ll be obsessed.

Are you ready to serve up the most exciting, tasty yet easy appetizer this season? I have a Blistered Shishito Peppers with Ginger Soy Sauce recipe for you!

These blistered shishito peppers are immensely popular at Japanese izakayas (Japanese gastropubs), but you can easily make this at home. They are so fabulous at any summer parties, BBQs, game days, or Asian-themed gatherings. Don’t forget to bring out some icy cold beer or sake or whatever bubbly you have on hand!

What Are Shishito Peppers?

Shishito peppers (獅子唐) are East Asian variety peppers that are harvested early when they turn bright green and reach 3-4 inches long. These slender, finger-like peppers have a mild heat and are enjoyed commonly in Japanese cuisine.

While shishitos might not meet the score of capsaicin-induced heat level, you would love them for their infinitely cool and thrilling factor.

The peppers have very thin skins so they cook quickly and could easily sizzle and achieve appetizing chars on the outside in an open flame or in a hot pan. They are so delicious when pan-grilled for teppanyaki, skewered for yakitori, or battered and deep-fried as tempura. In the US, they are gaining fast in popularity as grilling peppers.

When pan-fried as I did in this blistered shishito peppers recipe, you’d get tantalizingly smoky, caramelized yet bright flavor. The skin around the charred edges is crispy and the inside is deliciously creamy.

These are uniquely flavorful chili peppers: sweet, crisp, and citrusy taste with a slight hint of smoke. Once cooked, shishito peppers have a verdant tang and creamy texture. They might remind you of green bell peppers, but with a little more kick and personality.

Shishito peppers aren’t hot at all—most of the time. To give you a comparison, jalapeños are rated at 2,500-8,000 units on the Scoville Heat Scale while shishito peppers are only rated anywhere between 50-200 units. Which is why they are the only chili peppers that the Japanese like myself daringly eat whole:)

While they are on the tame side of things, about 1 in 10 to 20 of the shishito peppers do pack some good heat. Occasionally, you’ll come across some surprising outliers that can set your mouth aflame. And that’s the exciting part of eating shishito peppers.

Where to Buy Shishito Peppers

Shishito peppers are harvested year-round but are at their peak from summer to early fall, so look for them at your local farmers’ market!

You can also find shishitos at major grocery stores, like Trader Joe’s, Whole Foods, local co-ops, etc. Alternatively, you can grow them easily in your own garden!

How to Make Blistered Shishito Peppers with Ginger Soy Sauce

This makes an ideal vegan and gluten-free appetizer.

If you’re interested in some easy variations for your blistered shishito peppers, try:

What to Serve With Blistered Shishito Peppers

Blistered shishito peppers go with almost everything! Hand me a plate and I could easily finish them off all by myself as a stand-alone appetizer.

You could serve it as a side to go along with your cold soba noodle salad, BBQ dishes, sushi meal, and more! Another great idea is to serve blistered shishito peppers alongside a few other izakaya dishes to make a spread for the evening meal. 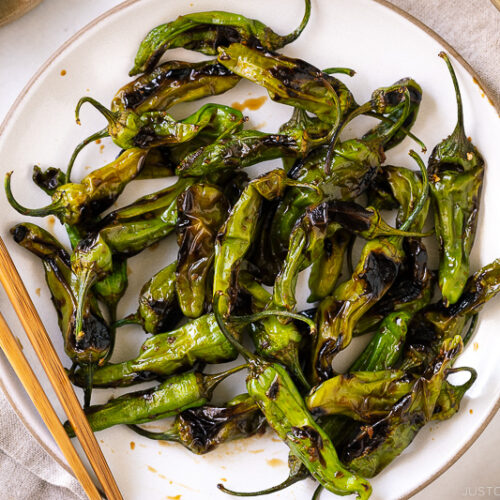 4.67 from 6 votes
Smoky, fun, and super addicting, these blistered shishito peppers make the best appetizer to serve with your summer dishes! Roast these Japanese peppers in a dry skillet until deliciously charred and flavor them with a simple ginger soy sauce. It's full of umami and simply sublime. You’ll be obsessed.
Print Recipe Pin Recipe

For the Ginger Soy Sauce

To Make the Ginger Soy Sauce

To Roast the Shishito Peppers