Skip to content
Autumn College Meal Easy
This post may contain affiliate links. Please read my disclosure policy for details. As an Amazon Associate, I earn from qualifying purchases.

Cure your winter blues with a steamy pot of Japanese Kimchi Nabe. Made with anchovy broth, kimchi, pork belly, and vegetables, this soup pot is hot and sour with a good kick of spice that warms you right up!

As cold weather continues in most of the Northern hemisphere, I’d like to share another Japanese hot pot recipe with you.

Today we’re cooking Kimchi Nabe (キムチ鍋). Back in the early 2000s, Japanese TV stations started to broadcast Korean drama series. At that time the Japanese were exposed to more Korean foods that were relatively new to them. One of the Korean dishes that became popular in Japan was Kimchi Jjigae, Korean Stew.

Japanese started to make their version at home and in restaurants and called it Jjigae Nabe (チゲ鍋). Then they learned that Jjigae and Nabe have similar meanings and that the word “Jjigae” in Japanese implies spicy Korean food. So these days people call it Kimchi Nabe.

Now you are probably wondering if Kimchi Nabe is the same as Kimchi Jjigae, or how different they are. So let’s get started.

First thing first. Are they the same or different? The quick answer is yes and no.

Kimchi Jjigae was introduced to Japan but after some time, the Japanese people adjusted the flavors to their liking (less spicy) and added more vegetables to this dish that are not used in Kimchi Jjigae. Also, the Japanese use a big donabe for this dish and treat it like a nabe (hot pot) instead of a single serving Korean stew.

So… How did the Japanese adopt Kimchi Jjigae?

Each household makes this dish differently, but here are some of the “general” changes that I could think of:

I received quite a number of requests for the Kimchi Nabe recipe from my readers so I hope you like my version.

As I live in the U.S., and I’m more exposed to Korean foods, I decided to implement the Korean approach and cooked meat, kimchi and onion first. I use Korean kimchi instead of Japanese kimchi made in Japan, so I believe this method works best for my Kimchi Nabe.

Then I seasoned and added soup stock. Speaking of stock, I could have made it with typical Japanese dashi made of kombu and katsuobushi (bonito flakes). However, to make it a tiny bit closer to the original Kimchi Jjigae flavor, I used iriko (dried baby sardines/anchovies) and kombu. You could substitute with chicken broth as well, but I really encourage you to make your own broth with kombu and anchovies (or even bonito flakes).

If you don’t eat spicy food, reduce the amount of kimchi, gochujang, and gochugaru. The soup has good flavor from dashi already so removing the amount of spice won’t affect the final result too much.

Some people asked about premade nabe soup stock that is sold in Japanese grocery stores including Kimchi Nabe and Yosenabe, or Chanko Nabe. Those premade soup stocks seem convenient as all you need to do is to pour the soup broth into your pot and add fresh ingredients to it.

However, they include preservatives, MSGs, and unknown ingredients that I can’t pronounce if you look at the ingredients on the back. I highly recommend and encourage you to make your own nabe soup broth. If you make the soup stock (dashi) the previous day or before going to work, it’s really easy to put it together when you are ready to eat.

How to Season Your Donabe

By the way, if you have a donabe earthenware pot and don’t know how to season or take good care of it, I recommend checking out this post. 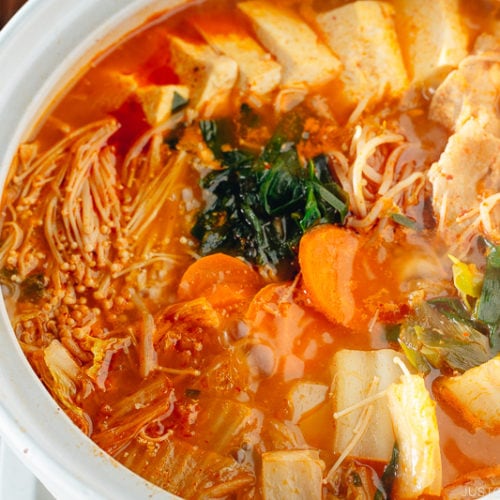 4.65 from 17 votes
Cure your winter blues with a steamy pot of Japanese Kimchi Nabe. Made with anchovy broth, kimchi, pork belly, and vegetables, this soup pot is hot and sour with a good kick of spice that warms you right up!
Print Recipe Pin Recipe