Skip to content
Chicken Easy Under 5 Ingredients
This post may contain affiliate links. Please read my disclosure policy for details. As an Amazon Associate, I earn from qualifying purchases.

With Shio Koji, a natural seasoning used in Japanese cooking, you can make EASY & DELICIOUS Shio Koji Chicken in no time with just 4 ingredients!

Sometimes a simple ingredient or condiment is all it takes to lend a magical touch on a dish. Garlic, ginger, miso, yuzu kosho, and sriracha are just some fantastic examples. And if you haven’t heard of Shio Koji, allow me to introduce this seasoning to you today. I’ve pulled off an incredibly amazing Shio Koji Chicken (塩麹チキン) that takes only 4 ingredients to make.

All thanks to Shio Koji, I get an umami-packed delicious chicken on the table with minimal effort. It is that WOW! You will want to have it in your pantry at all time too.

What is Shio Koji?

Shio Koji  (塩麹, 塩糀) is a natural seasoning that we use to marinate, tenderize, and enhance the umami in foods. It’s made of just a few simple ingredients: salt, water, and rice koji.

One of Shio Koji’s ingredient, rice koji, or Kome Koji (米こうじ, 米糀, 米麹) in Japanese, is steamed rice that has been treated with koji mold spores (Aspergillus oryzae, koji-kin 麹菌, or koji starter).

Koji – Mold that You’ve Eaten Before

Koji is a specific strain of mold that has been cultured over the centuries. You may feel hesitant reading all about mold and wonder why we make rice moldy on purpose. But guess what, you have most likely eaten it already!

Why do we use koji in cooking? Because it’s a live food that is rich in enzymes. And we need enzymes to break down starches and proteins in food into sugars and amino acids. This process makes the food naturally sweet, aromatic, and rich in umami.

How to Use Shio Koji

You can use shio koji to marinate your meats and vegetables, make pickles, or use it as a salt substitute. Shio koji is REALLY versatile and I’ve used it to make some delicious recipes on Just One Cookbook.

If you’re not sure, start using shio koji to replace salt. In a recipe that calls for one teaspoon of salt, you can substitute with 2 teaspoons of Shio Koji. You will not only get the “salt” effect but also experience the “umami bomb” effect!

Get a Bottle of Shio Koji and Start Cooking!

After sharing several recipes that require rice koji, I learned from readers that it’s actually a lot easier to get Shio Koji from Hikari Miso®. It’s available in Japanese grocery stores and Amazon as well as a big Korean grocery chain, H-Mart. Unlike Japanese grocery stores, this Korean grocery chain has many locations throughout North America. You may find it on the shelf or refrigerated section of the store.

When you open the bottle, you will immediately notice the sweet smell that reminds you of sake. With the help of all-natural koji, you will notice the significant flavor boost in your daily cooking! 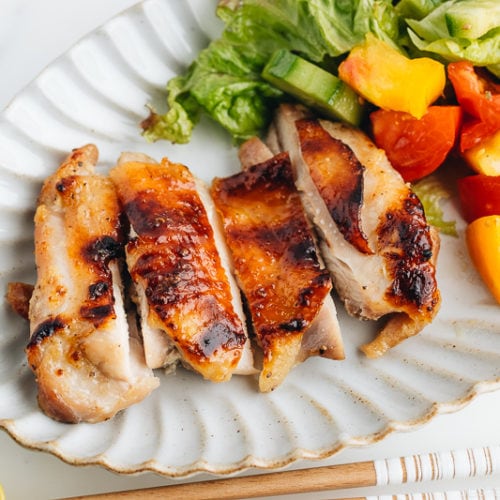