Skip to content
Autumn Christmas Easy
This post may contain affiliate links. Please read my disclosure policy for details. As an Amazon Associate, I earn from qualifying purchases.

A Taste of Hiroshima: Grilled Oysters with Ponzu Sauce. These plump, juicy oysters with citrus ponzu sauce will get it off to a good start of the meal! 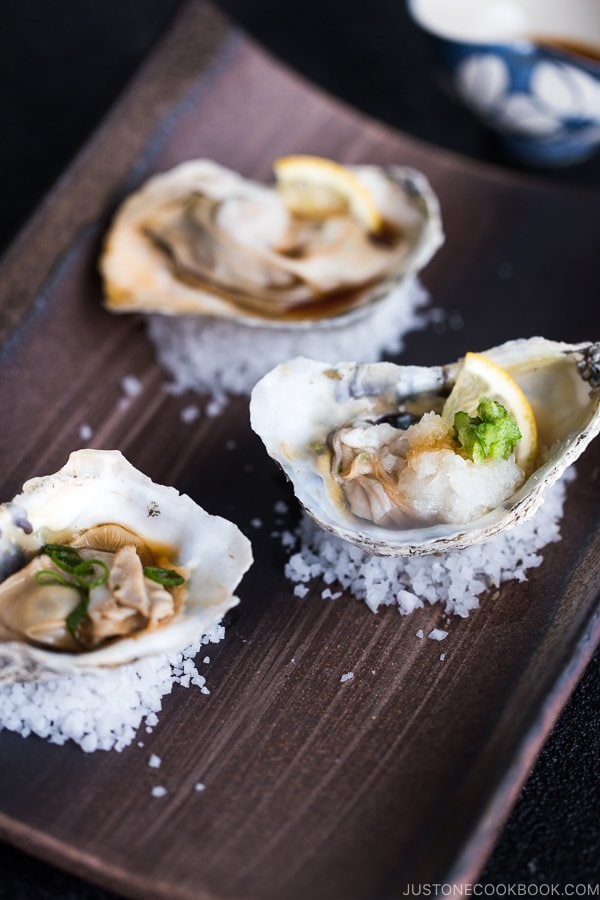 One of the best ways to experience a local culture is food. As we kicked off our Japan Travel series, I am super excited to feature a local recipe for each of the locations we traveled to. Today we are going to have a taste of Hiroshima with their most famous local food – oysters!

Today I will bring you this most delicious Grilled Oysters with Ponzu Sauce (牡蠣のポン酢焼き)! And don’t miss out on the Hiroshima Japan Guide if you have yet to read it. 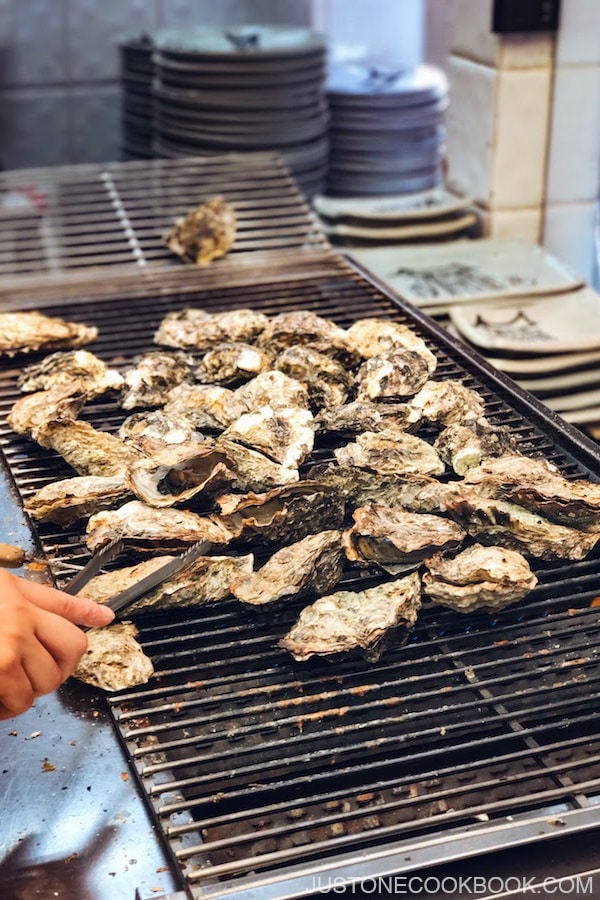 In Hiroshima and Miyajima, the oysters are usually enjoyed cooked rather than raw. If you like the rich, irony taste of oysters, but you don’t care for eating them raw, then today’s recipe is especially for you.

For those who enjoy raw oysters, have you tried grilling them? They are equally delicious as fresh raw oysters!

Watch How to Make Grilled Oysters with Ponzu Sauce

Watch my “Grilled Oysters with Ponzu Sauce” video on YouTube 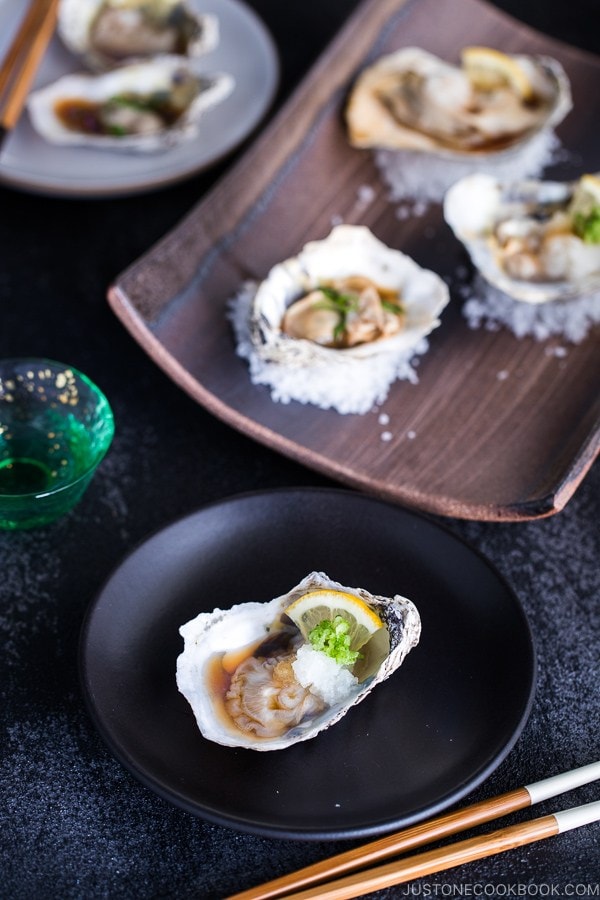 How to Pick Oysters

Oysters are sold all year round, but they are the firmest and sweetest from late fall to spring. At your local fish market or grocery store, look for oysters that feel heavy in the hand and have a deep cup. Make sure they are tightly closed so the brine is kept inside.

If the shells are slightly open, tap the oyster gently to make sure it closes its shells when tapped. Don’t get any oysters that don’t close. 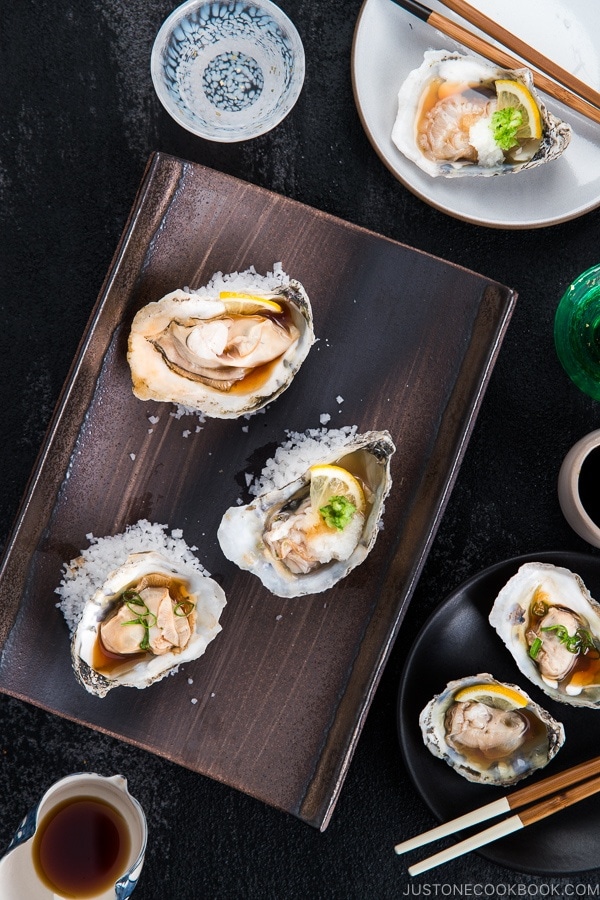 Five Types of Oysters – Which One to Choose?

Depending on the location and condition of their cultivation, there are significant differences in the flavor profiles of oysters. In general, Atlantic/Eastern oysters tend to be brinier while Pacific oysters tend to be sweeter when it comes to flavor.

Just like any food, it’s all about personal choice. Try out different oysters to see what you like. If you’re new to oysters, start with the sweeter type.

The type of oysters I bought at Whole Foods for today’s recipe is called Olde Salts Oysters (Crassostrea Virginicas – #1 below) from Chesapeake Bay, Virginia.

Atlantic/Eastern oysters account for most of the American oyster supply. They tend to be brinier than other oysters, with a thinner, more watery texture.

European flats have smooth, round, flat shell with a shallow cup and have a meaty and crunchy texture with a sharp mineral, a bit gamey taste.

Kumamoto oysters were introduced to Washington in 1947 and became one of the most popular oysters in the US (They were never popular in Japan). Kumamotos spawn later and in warmer water, so they remain firm and sweet even in summer months. They are small and deeply fluted with sharp, pointy shells, and have a sweet taste.

Olympia oysters are the smallest of all the species (about the size of a quarter!) and are the only oyster native to the West Coast. They were so popular during the Gold Rush era and thought to be extinct. However, some wild populations still exist and are protected in the Pacific Northwest. Olympias at the market and in restaurants are cultivated mostly in the Puget Sound, Washington. They have a creamy texture with a sweet and metallic taste.

Formerly know as Japanese oysters (as they were brought to the US from the Asian Pacific in the early 1900s), Pacific oysters are the most commonly cultivated oyster on the West Coast. They are small and distinctly more fluted with ruffled edges, and have a sweeter, less briny taste than Atlantic oysters. 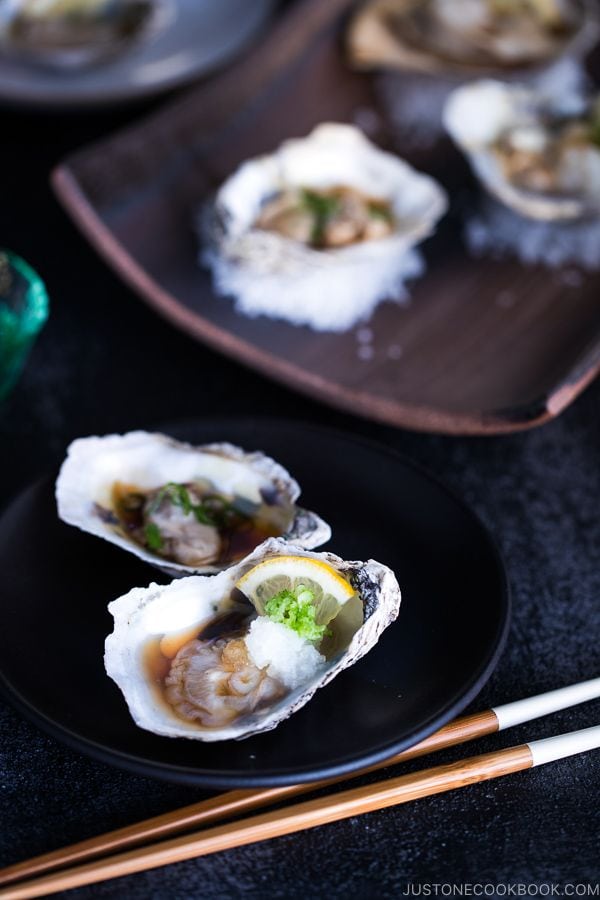 In Japan, people enjoy grilled oysters in different ways, from a simple squeeze of lemon juice to melted butter with a drizzle of soy sauce. Today I want to show you our family’s favorite way to eat oysters. We personally like it with citrusy ponzu sauce, and here are quick three ways to enjoy oysters with the use of ponzu sauce.

Mizore (みぞれ) (‘sleet’ in English) means grated daikon in Japanese cooking terms from its look. For this recipe, I grated both daikon and cucumber to create refreshing garnish. When you pour ponzu sauce over the oysters, it gets dispersed quickly and the flavors meld with the oyster instantly. With the addition of fine texture from the grated daikon, it gives a fresh note to your tongue.

To enjoy ponzu sauce with grilled oysters, a simple garnish of green onions would be just enough, especially a homemade ponzu (YUM!!!).

If you’re lucky enough to live close to a large Japanese grocery store like Mitsuwa and Nijiya, you will most likely find this amazing condiment called Yuzu Kosho (柚子胡椒) made of chili peppers, yuzu peel, and salt which is then allowed to be fermented. Amazon sells it too, but I haven’t ordered it so I am not sure about the quality (yet). If you can get hold of yuzu kosho, you want to use it to spice up your dishes and sauces. Here I added just a dash of yuzu kosho into my homemade ponzu sauce. And I was amazed how much this little seasoning can jazz up the grilled oysters with its peppery and citrusy kick.

Now it’s time to slurp and swoon over these deep-cupped shellfish. If you’re planning a trip to Hiroshima, you know the first food you can eat! 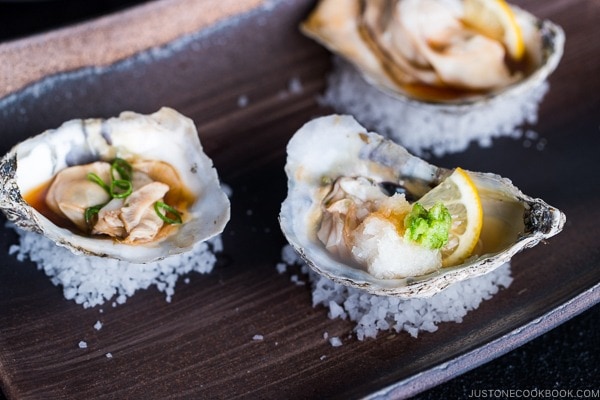 Don’t want to miss a recipe? Sign up for the FREE Just One Cookbook newsletter delivered to your inbox! And stay in touch with me on Facebook, Google+, Pinterest, and Instagram for all the latest updates. 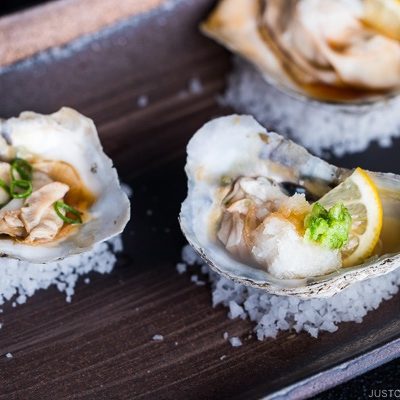 4.43 from 7 votes
A Taste of Hiroshima: Grilled Oysters with Ponzu Sauce. These plump, juicy oysters with citrus ponzu sauce will get it off to a good start of the meal!
Print Recipe Pin Recipe 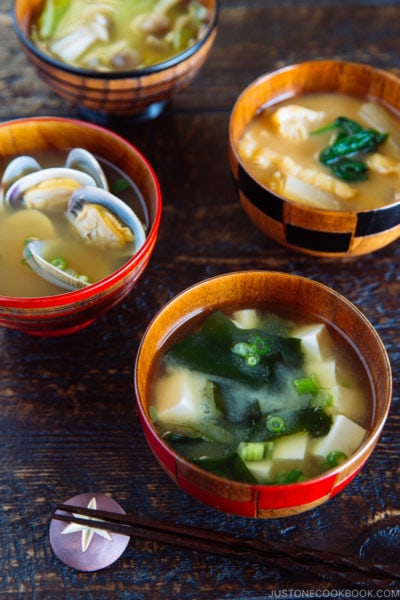 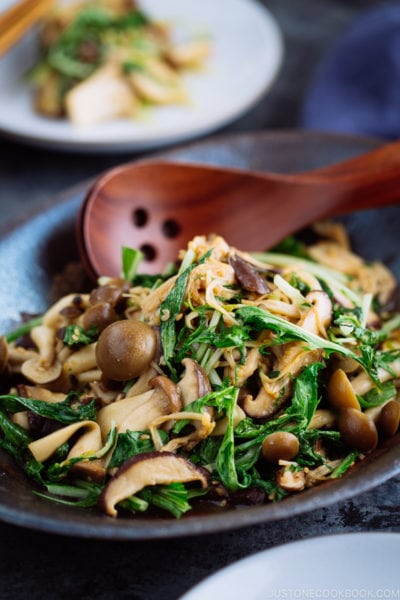