Sekihan or Red Bean Rice is a traditional rice dish served on happy occasions in Japan. Glutinous rice is cooked with azuki beans till chewy and tender and topped with a sprinkle of salt and black sesame seeds.

What are some of the celebratory dishes in your culture? In Japan, we have quite a number of foods that we eat on special occasions. One of them is Sekihan (赤飯) or Japanese Red Bean Rice. To usher in birthdays, graduations, weddings, or Japanese New Year, let’s learn how to make this beautiful bean and rice dish today.

Sekihan (赤飯) translates to “red rice” in Japanese as the glutinous rice is tinted with an attractive shade of red hue from cooking with Azuki beans. The red color of the rice symbolizes happiness and prosperity. It’s a traditional dish served on many happy and celebratory occasions, such as New Year, the birth of baby, birthdays, festivals, and weddings.

Traditionally Sekihan is made of 100% glutinous rice (you might also call it sweet rice or mochigome). It is very filling and can be heavy on the stomach, so we don’t eat it regularly.

There are also regional varieties of the Sekihan. Some versions use a pinch of sugar instead of salt to give a sweet flavor, and some use other kinds of beans such as amanatto (sweetened bean confectionery, 甘納豆) or sasage (black cowpea beans, ササゲ) instead of Azuki beans.

In Japanese cooking, Azuki beans (or Adzuki beans) are almost exclusively used in making Japanese sweets or pastries. The beans are boiled, mashed, sweetened, and then used as fillings in Daifuku Mochi, Manju, Dorayaki, Red Bean Ice Cream, Anpan, and so on.

For this instance, however, Azuki beans make a rare appearance in a non-sweet dish that is rather unique to Japanese cuisine. It replicates the ancient red rice in Japan and brings many great meanings to the culture.

Look for Azuki red beans in Japanese or Asian grocery stores, or on Amazon.

1. Do we need to use Japanese glutinous rice (sweet rice)?

Look for it in Japanese/Korean grocery stores. On the rice packages, the labels should indicate mochigome or もち米. You can read more about it on our pantry page.

When you rinse the rice, you have to be gentle as glutinous rice is easy to break.

When we cook standard Japanese short-grain rice, it is very important to soak the rice before cooking so the rice absorbs some water and becomes tender when cooked.

However, when cooking glutinous rice (sweet rice), we do not need to soak it in water if it’s cooked in a rice cooker, pressure cooker, or a pot over the stovetop. In another word, you have to soak the glutinous rice if you’re going to steam it.

Because glutinous rice is easy to absorb water, soaking is not necessary. If you soak the glutinous rice, and then cook it (in the water) in the rice cooker/pressure cooker/pot, it ends up soggy and mushy.

When you steam glutinous rice, it’s best to soak at least 2 hours, or ideally overnight.

Soaking the dried azuki beans overnight or as long as 16 hours will help to reduce the cooking time. As azuki beans have a hard shell, soaking for a few hours or even overnight is not long enough to make a difference. These days many azuki bean packages recommend cooking beans straight from the package without soaking.

However, there are other benefits of soaking beans. For example, the water helps absorb some of the complex sugars in the beans that cause gas.

Traditionally, sekihan and okowa (glutinous rice dishes) are made in a steamer and I believe the texture of the rice made in the steamer is the absolute best. Not mushy or soggy, just perfectly cooked rice. However, most Japanese households prepare sekihan using a rice cooker as it is convenient and fast, and offers a consistent result.

The steaming method is a bit fussy with a few extra steps and it’s not as easy as other cooking methods. When I prepare sekihan for my family, I’ve only used my rice cooker, pressure cooker, and a pot over the stovetop, and I’ve never used a steamer. Therefore, from my own experience, I’ve decided to share my sekihan recipe using tools most people have.

You may have encountered recipes that use a mixture of glutinous rice and standard Japanese short-grain rice.

Although sekihan is traditionally made with 100% glutinous rice, some people add a small portion of regular rice to reduce stickier/mushy texture when cooking in a rice cooker or on the stovetop (less problem with a steamer). Also, when sekihan is cooked with glutinous rice, the rice gets harder as it cools. Adding a small amount of regular white rice is supposed to ease that issue.

We have a saying ‘Let’s have sekihan‘ which means ‘Let’s celebrate!’ I hope you get a chance to make this tasty auspicious dish on your next special day. 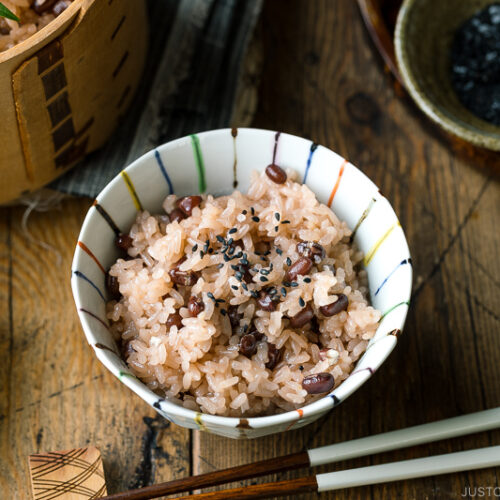 4.87 from 36 votes
Sekihan literary means “red rice” in Japanese because the rice is red from cooking with Azuki beans. It’s a traditional dish served during the New Year, births of baby, birthdays, festivals, weddings, or any kind of celebration.
Print Recipe Pin Recipe

To Cook Sekihan in Rice Cooker

To Cook Sekihan Over Stovetop

Editor’s Note: The post was originally published on January 9, 2012. New images and video are added to the post and the content has been updated in May 2021.